Curse of the Azure Bonds

GameSpot's nice History of AD&D gives a good overview of Curse of Azure Bonds as follows: "Published in 1989, Curse of the Azure Bonds followed the story of Pool of Radiance with more monsters, treasure, character classes and level caps. Shortly after the defeat of Tyranthraxus the Flamed One and the destruction of the Pool of Radiance, the heroic party was waylaid, knocked out, and marked with the five mysterious azure bond images stamped just beneath the skin of each adventurer's arm. Your characters recovered consciousness in the town of Tilverton on the Dalelands. Before they could even begin to ascertain who or what had attacked them, they found themselves compelled beyond their will to attack the entourage of a false prince and were beset by the city guard. Fleeing to the thieves' guild beneath the sewers, the members of the party would then begin their arduous quest to hunt down the creators of each of the five magical bonds and ultimately free themselves of the curse.

In terms of gameplay and structure, Curse of the Azure Bonds followed its predecessor more or less directly, though it broadened the path considerably. The already solid game system of Pool of Radiance benefited greatly from material that had hitherto been conspicuously missing, including the ability to advance to tenth level for clerics and eleventh level for magic-users (which meant that spells of up to fifth level were available), the ability to enlist characters of the more esoteric AD&D Paladin and Ranger (and with the latter, the line of Druid spells) character classes, and the option for human characters to dual-class."

I was super impressed by Curse of the Azure Bonds; it combined strategy with role-playing in a succulent real time interface that boasts graphics strong enough to wow most users. In the third chapter when I successfully attacked and decapitated the Marie Antoinette action double, I was totally dumbfounded by the piles of peach-flavored sweet tarts that spilled out of her breasts. This amazed me, shocked me, stunned me, infuriated me, disgusted me, and aroused me.

I expected Marie to simply die, but no such luck. Furthermore, when she finished spilling candy out her tits, she plucked her dismembered head off of the ground, and activated a heat laser eye beam that melted the candy into a great molten, smoking pool of caramelized goo, and splashed a portion of it into the eyes of my bewildered character. I have never been so surprised by a foe. She then proceeded to sing a seduction song and perform a salty strip tease on the red dragon skinned chocolate-legged table that her various instrument of torture sat on. I've never seen a decapitated chick perform a strip tease, but it is not to be missed. In fact, I think that I've kind of developed a little bit of a fetish. The only trouble is meeting decapitated chicks, there not as common as you might think. I met a few at the local funeral home, and one at the post office last Monday, but more and more I find that they for the most part stay indoors where they can more easily regulate their bodily functions.

Anyway, the game is really good. It invokes a sense of reality unparalleled by daily life. The characters seem more real and genuine than most of the dead beats that I meet on the street every day. The women are pretty, and the men are strong. Even the children are above average. If I could meet the creators of this game, I would ask them to invent a way for me to enter the game world. I'd definitely get it on with Marie Antoinette, and take her to the Amazon. I just know that the Quetelhualtco tribe would consider her a deity, and throw little fruits and vegetables at her feet on top of a salad of virgins and castrated goats. Bill Rice and Candy Worhal are gods, and I only wish that they would have a child. Thank you, all you're doing great keep up the good work. 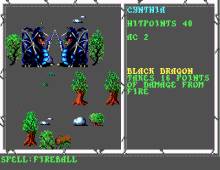 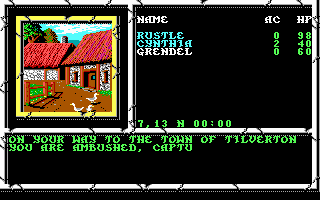 Curse of the Azure Bonds screenshots

People who downloaded this game have also downloaded:
Pool of Radiance, Pools of Darkness, Secret of the Silver Blades, Champions of Krynn, Death Knights of Krynn