GameSpot's nice History of AD&D gives a good overview of Pool of Radiance as follows: "Released in 1988, Pool of Radiance was the first of SSI's illustrious gold box AD&D series of games. Based in the Forgotten Realms universe on an actual AD&D campaign module, Ruins of Adventure, Pool of Radiance took the rules, statistics, and number-crunching of the pen-and-paper game and brought it to computer screens everywhere.

The game itself began in New Phlan, a small settlement built on the ashes of a once-great city. The player would assemble a mercenary party of up to six characters, with two slots open for NPCs. The adventure began with a block-by-block quest to rid the ruins of the old city from the monsters and evil spirits that had since taken residence, then later expanded to the outland areas of the Moonsea, culminating in a dramatic battle with the demon Tyranthraxus the Flamed One.

Though somewhat criticized for its limitations, such as the availability of only four character classes (fighter, magic-user, cleric and thief) and the low character level cap (level nine for thieves, eight for fighters and six for spellcasters), Pool of Radiance, with its detailed art (many pictures were based directly on illustrations from existing monster manuals), wide variety of quests and treasure, and fully tactical combat ultimately succeeded in its goal of bringing a standardized form of AD&D to the home computer, and laid the foundation for other future gold box AD&D role-playing games."

Nice AD&D RPG game. Choose between many races and classes before you begin your journey. Your party has to help in defeating some evil ones from the city of Phlan. After this 'beginning' you are on your way to find the Pool of Radiance.

Pool of radiance is the first RPG (role playing game) in a long series from SSI.

You begin the game by creating up to six player characters from a vareity of races like human, elf and dwarf. Each race has different abilities as regard to the classes in the game for instance halflings are small and have higer max dexterity than other races.

Some races can also have multiple classes as well so you get the most use from one character but they will take more experience to gain levels. When you gain levels you will gain hitpoints (health) and your thac0 modifier will increase making it easier to hit an opponent.

(note: I'm not entirely sure about thac0, in the 3rd edition its called to-hit modifier)

The main game is played from a screen divided in three different frames, the top-left shows a 3D depiction of the surroundings, the top-right shows all the characters in your party and the lower portion shows text messages. At the bottommost part of the screen you can usually select things like casting and resting. Navigation is done with the arrow-keys and home/end to select different characters and options.

The graphics are fairly simply with almost no animation and also very little sound and music effects. The later AD&D games from SSI are improved over this version but since this is the first one it seems a bit crude compared to them but the main engine remained in this form for several years.

When you battle with enemies the view switches to an 3D overhead view which fairly accurately mimics the pen & paper style of tin characters placed on a grid.

You start the game arriving in New Phlan and you are welcomed by man named Rolf.

He gives you a quick tour of the city and shows you some of the important buildings like city hall and the training guild. Finally he shows you the entrance to the slums and says goodbye after which you are on your own. From here you can do and go where you want.

Since you have no weapons and equipment its advisable that you go and buy some from a local shop. You can then stop by the training guild to hire some extra hands or you can go straight to city hall and find out what kind of jobs they have for adventurers. Most of these jobs consist of clearing an area of monsters which is usually done by beating several enemy parties in random encounters and/or defeating a specific group.

Sometimes you can get other missions like a rescue or gathering information. Each mission is posted as a number which you will have to look up in the journal so without it the game is pretty much unplayable.

Also contained in the journal are journal entries referred to in the game by number which shows maps, conversations and other interesting things you come across your jouneys. If you read them in advance you can spoil the plot so I suggest you read only the ones the game tells you about, some are even fake to mislead you!

As you go along with the missions you will find out more about the plot and the reason why all those monsters are there in the first place.

This game is not for beginners because the difficulty level is very high, it's quite easy for all your party members to die in the first fight. Some weapons can do enough damage with one blow to kill a level one character.

This can be attributed to the AD&D rules which at the first levels can be very unforgiving.

You also have to do lots of micromanagement because you have to keep track of getting better weapons and armor for your entire party while keeping them alive. Temples are of very little use because they charge enormous amounts of money for simple healing tasks so it's best to stick to your own Clerics (healers).

If you don't have a lot of knowledge of AD&D rules I suggest you read the manual first because it contains a lot of information about the different classes and races and the limitations that they impose.

For the more seasoned AD&D and/or RPG fan this game can be a great challenge and fun to play. 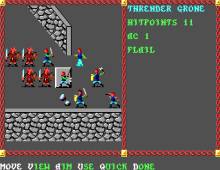 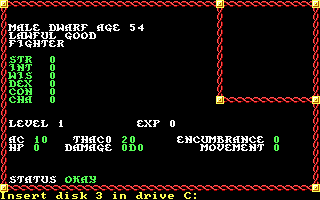 People who downloaded this game have also downloaded:
Pools of Darkness, Curse of the Azure Bonds, Secret of the Silver Blades, Champions of Krynn, Eye of The Beholder 1