Dark Queen of Krynn, The

GameSpot's decent short review of The Dark Queen of Krynn goes as follows: "The finale of the Dragonlance gold box role-playing game series, Dark Queen of Krynn took players all over the Dragonlance world, from the sea caves of the Dimernesti to the nether planes of existence. What begins as a lover's quarrel escalates to an episodic war, as the player's party is forced to jump from town to town to fight battle after battle. The adventure culminates in a mission to the nether realms to free the archmage Raistlin Majere (one of the most popular characters from the Dragonlance novel series) from his imprisonment in the Abyss.

Dark Queen of Krynn seemed to have more of an emphasis on combat than did its predecessors. The player's party would battle such ferocities as sahuagin, dark wizards (with the innate abilities of Mirror Image, Fire Shield, and Minor Globe of Invulnerability), and enchanted draconians (who were nastier than normal draconians in that they would explode when killed).

Unfortunately, a handful of bugs compromised what should have been a masterful conclusion to the series. Normally, a character with enough experience points to advance a level through training would have his name highlighted; unfortunately, one bug prevented this display for multiclass characters, so that careful count had to be made of a character's XP if he was not to waste experience points on training for a level he earned some time ago. Other bugs involved inescapable areas, like the teleport room in the Fire Tower or certain battlefields in rooms without doors, in which case the only way to recover would be to reboot." 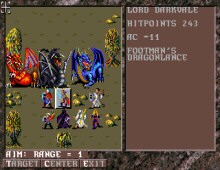 Dark Queen of Krynn, The screenshot

People who downloaded this game have also downloaded:
Death Knights of Krynn, Champions of Krynn, Curse of the Azure Bonds, Pools of Darkness, Pool of Radiance