Eye of The Beholder 3

Eye of The Beholder 3 is a disapponting final entry in the popular Eye of The Beholder trilogy, and a good example of how important a good design team is. After hiring Westwood to develop the first two games, SSI took control with their own design team to release this episode. The result is a slow, uninspiring, and very tedious RPG which relies more on endless hordes of skeleton warriors than stellar gameplay to keep the game moving.

The plot picks up where EOB2 left off. This time, you are asked by a suspicious character to rescue Myth Drannor. Strangely enough, you accept the offer and are teleported to a graveyard not far from the city. From there, you will fight through hordes of undead to the city's temple, to face the God and defeat him.

Let's start with the good, since they are few and far between. EOB3 features several new ideas compared to the prequels. The gameworld is much more diverse: there are open areas (forest and the city), a thicket maze, and an underwater level. Many new spells and magical items are added - so many that you probably will not be able to try them all. Most of the new spells are quite useful, especially non-combat such as "Haste" and "True Seeing," the latter of which will not only show you hidden passages, but will also warn you about which items are blessed cursed. Another good improvement is the multiple character selection option, which allows several charaters in your party to attack simultaneously. The plot also is quite interesting, with several unexpected twists and turns along the way, although the ending isn't nearly as good as EOB2.

Okay, that's enough-- now for the bad. In sharp contrast to the excellent atmosphere and addictive gameplay of the first two games, EOB3 is just plain boring to play. Most puzzles are of the trivial find-the-right-combination and find-the-right-item types. Combat, similarly, is more boring than fun-- the game relies on sheer number of undead to provide the challenge, not on any good monster AI. Even the "ultimate boss" of the game, the Evil God you face in the temple, is disappointingly easy to kill. Die-hard RPG fans who have finished EOB2 will definitely feel that disposing of Dran Draggore in that game was a much more difficult-- and rewarding-- task.

Overall, EOB3 is a disappointing end to what could have been one of the best RPG trilogies of all time. Had the Westwood team still been in charge of the design, we would have seen a much better result instead of this tedious, uninspiring release. Even when judged on its own merits, EOB3 could be considered at best just a barely above-average RPG title. Fans of the first two games may want to play it anyway just to see how the story ends, but all other RPG fans should stay away from this boring game.

Save often! The game will sometimes throw you out with 'packed file is corrupt' error. When that happens just load the game again and restore your last save.

Eye of the beholder was one of the first AD&D titles to have a graphical interface and semi 3D graphics, coupled with excellent gameplay the game was quite a hit. The sequel boasted a far bigger game, more enemies, a better intro and a far better ending so basically better in almost every aspect. The third and final game was not made by the original team but uses the same engine as the heroes try to free Myth Drannor from a lich that has taken over the place.

Like the first two games you can create a party of four heroes of varying classes and races according to the 2nd edition AD&D rules. You can have a maximum of six players in the group but you will have to pick up the extra's during your adventures. If you're not too familiar with the rules you can choose from races like human, elves, dwarfs, gnomes, halflings and half-elfves and classes like fighter, mage, cleric, ranger etc. Some races allow you to choose multiple classes for a single character which allows you to become really versatile but you'll gane levels very slowly because of this. Not all races allow all types of class like paladin which is only available as a human. Once you create your characters you can edit their stats like strength and dexterity to help you a bit, you could see this as cheeting so decide for yourself what you want to do.

The game starts in a forest in the Myth Drannor area and it's invested with ghosts who aren't too friendly, luckily the ghosts are quite vulnerable to your average swords and maces so you can make short work of them. Unfortunately there is no easy way out of the forest so you'll have to find an axe and hack your way through it. There's plenty of equipment lying around from adventurers who weren't so fortunate so take what you can. Once you take care of the ghosts you should find a quiet place so your spellcasters can pray and memorize some spells which is really helpfull in and after battle. You start at about level 11 so you can access relatively high level spells but mages can only learn new spells from scrolls you find along the way, be sure to hold on to those and not use them for oneoff. Wands are far better for combat as they almost always contain offensive spells and can be discarded after they are used up. Once you find your way through the maze of trees you come across maze inside a maze of trees, a very dirty trick in my opinion to increase a game's length at such an early point in the game. Here and later on as well you can chose to grab only the item you really need to go on or search the whole place for better equipment, usually the equipment you find is worth the time you spend so. You won't be stuck in the maze forever though and once you get to Myth Drannor you can investigate and finally attack the lich himself.

The interface hasn't changed much from the previous games, a 3D view on the left with a big compass and the party on the right of the screen. Items are placed directly into the inventory of a character and you can carry only a set amount of items so be carefull to not waste space. Don't throw away items either though because in a maze it's often usefull to drop an item or two to show you've already been there. There's plenty of items to place on a character apart from armor like necklaces, rings, throwing weapons, boots etc. Weapons and magic books are simply accessed next to a characters portrait by rightclicking on them, you will then attack or you can select a spell to cast. Later when you encounter more friendly people they can join your party if you allow them to, make sure the fighters stand in front of the group, people with long range weapons like bows or polearms in the second row and casters behind.

Overall this game is quite like it's prequels but it doesn't quite have the feeling of them. The story is certainly not as involving, the level design is rather weak and then there's the technical difficulties like slowdowns which makes the mouse cursor move rather erratically and is really annoying. Graphically the series was fine so there hasn't been a real upgrade of that but many monsters and environments in the game weren't seen before so it's not a complete copy. I have great fun with the first and second game so I was pretty much obligated to play this one, unfortunately it doesn't stand too wel on it's own especially if you compare it to the game the original team made, Lands of Lore, which is incredible. Still for fans of the series this is still worthy end to the series. 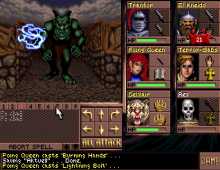 Eye of The Beholder 3 screenshot