Long hailed as one of the best RPGs ever created, Richard Garriott's revolutionary classic Ultima IV: Quest of The Avatar gets a great facelift with this excellent VGA graphics and MIDI patch by Joshua Steele, a die-hard fan of the series. From the official site, the patch "...[upgrades] Ultima IV to 256 color graphics with MIDI support. The patch replaces the tileset, font, game, and cutscene graphics, as well as correcting several conversation bugs within the original .TLK files. Adds command keys to Reload the last saved game and Exit to the OS." In other words, it adds enough pizzazz to lure the faithful back to Britannia ;) Die-hard fans can stop reading this review now and download the file below. If you are a newbie who has never played the game before, then read on for my review.

My most favorite game in the Ultima series, the fourth game in the saga features a greatly improved version of Ultima III engine, with color graphics and better character interaction (for the first time, you can now have actual conversations with NPCs). But what really makes Ultima IV revolutionary is its radical departure from any other RPG made before— or since. Instead of building up your character by accumulating combat experience in order to face the big evil foozle, your goal in Ultima IV is to become the Avatar, a spiritual leader for the people of Britannia. This meant upholding the "eight virtues," and basically trying to become a better person. This means, for the first time, that you will do good deeds simply because it is a "right thing to do" rather than to get some physical reward in return. The game world is deep enough that various activities, such as tipping beggars or allowing wounded monsters to run away, would increase the virtues (compassion in this example). On the other hand, ignoble behavior that are typical in most other RPGs, such as backstabbing fleeing monsters or picking up things that don't belong to you, will decrease the corresponding virtues. More or less all your actions are evaluated in terms of virtue, and it is this "morality check" that makes the game so intriguing.

In addition to this very original and intriguing approach to gameplay, Ultima IV still has plenty of traditional RPG elements. There are many dungeons to explore, monsters to kill, and even a "Holy Grail" final objective that requires you to find the Codex of Ultimate Wisdom to complete your transformation into Avatarhood. Of course, you need to have done enough good deeds in all eight virtues to finish the game. Ultima IV was also the first game in the series that allows NPCs to join your party: it introduces the mythical Iolo the Bard, Dupre the Paladin, and Shamino the Ranger—characters that will feature prominently in later games.

With numerous innovations, intriguing gameplay, and a great story, Ultima IV remains one of few RPGs that truly deserves to be called "timeless." With ideas that are still fresh even today, it is arguably the best representation of the true Ultima spirit... one that has sadly been lost after Ultima VII. A classic in every sense of the word—and three cheers to Joshua Steele who makes gamers' return to Britannia all the more worthwhile.

Note: The game was released as freeware by Origin to promote the release of Ultima IX: Ascension, the final entry in the saga that sadly does not live up to its predecessors. 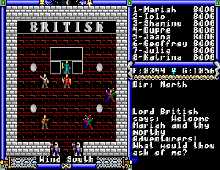 People who downloaded this game have also downloaded:
Ultima Underworld: The Stygian Abyss, Ultima IV: Quest of the Avatar, Worlds of Ultima: Savage Empire, Zelda Classic, Eye of The Beholder 2