This fairly old game (1990-1991) is in direct lineage with the famous Ultima series created by Richard Garriot, aka Lord British for the friends. It uses the engine of Ultima 6, which is to my opinion the second best engine Origin created (after the engine of Ultima 7).

The action takes place in a lost world called Eodon by the locals, after you were transported by a mysterious blackish gate. You must then return to your home land after accomplishing some quests, as the Avatar is used to. Indeed, this land is inhabited by several tribes, certain as primitives as cavemen, others as advanced as the Aztecs. The quest you work on is to get rid of the Myrmidex, an ant-like creature that destroy land and men throughout the world. They are fierce enemies but you know the tribes could fight them if only they worked together as one man. Unfortunately, every tribe as a problem with a least another one and thus will not unite their efforts. It is your mission to unite them so that they will fight together against the Myrmidex and thus enable you to go back in your world. In order to unite them, you must get from each tribe's chief a quest to achieve. The quests can go from just convincing the chief to put back on the throne the former chief of the tribe.

To help you some individuals will accept you as part of you team. Some figures include: Triolo, Shamuru, Rafkin and Jimmy. There is a little magic used for the game and only Triolo can practise it in your team.

As usual for an Origin game, you will spend hours playing in this rich and fabulous world. Every bit of the game is interesting and I must say I went to bed at 5am sometimes as I was so into it! The world is full of details and, as you would experience in Ultima 7, the richness of the game is so that you can even create your own weapons out of bamboo, extract branches from trees and burn them to obtain charcoal, dig clay and make pots with it, create rudimental bombs, chop trees with an axe but create a bridge over a pit, etc...

During the game you will get a wider picture of how the tribes came to be here, where the myrmydex come from and how you can go back home.

As a huge fan of Origin games and especially RPG games, I really emjoyed playing this game and I am sure you will find hours of good entertainment with it. Using a recent PC with recent sound cards, I never managed to get any music out of it. I know it is unfortunate because I played this game about 8 years ago on an older machine and the music was amazing. Also, using the computer clock to let the time pass, I found the notion of time to be a little bit distorded. Using the mouse is essential but to move I strongly recommand the keyboard. If anyone got to get the sound working fine on a recent machine, I would be interesting in knowing how they did it.

Being an older game, the player should not expect 3D engine, rendered graphics, etc. .. The fans would recognize a good RPG game of the early 90's and will devour it as I did, the newest players will see an old-fashioned kind of game and might help them to see how you don't need 3D to have a good time and how a good storyboard make games WAY more interesting. To conclude with a few words: PLAY IT!

Worlds of Ultima: Savage Empire is the first release in the short-lived World of Ultima series that was designed as spin-offs from Origin's lucrative Ultima games. Each game would take you, the Avatar from Ultima, into new worlds and time periods that are unrelated to Britannia.

In Savage Empire, you are transported to the lost land of Edon, which looks just like Earth thousands of years ago... except that humans coexist with dinosaurs. Here, you meet up with several familiar faces such as Shamuru (who looks and talks the same way as Shamino from Ultima), and learn that you must help the village unite all tribes before you can go home.

The game is based on the Ultima VI engine with slightly different graphics to add to the ambiance, and some modifications to tone down Ultime VI's focus on real RPG elements. For instance, Savage Empire has a lot more character interaction than the Ultima games, and unlike Ultima VI, characters will jump into conversations whenever they feel they have something pertinent to add. This greatly enhances the game and makes you feel like you are talking to real people with minds of their own. Spellcasting is also vastly simplified, with only nine spells and three reagents. In contrast to stealing as a way of life in Ultima VI, you are free to take whatever you want in your quest, although your pack is limited to 16 items no matter how heavy they weigh. Since the game is more of an adventure than RPG, this limit is slightly annoying in mid-game when you want to carry more items.

As in Ultima VI, you are able to interact with the environment in a realistic manner: picking branches from trees, digging clay from a riverbank etc. Many puzzles are fun and require more brains than brawn (getting rid of the hungry Tyrannosaur is my favorite), although sometimes you need to trek all over the map to find one small item that you overlooked earlier. Overall, Savage Empries is a great and unique game that may not appeal to die-hard RPGers who crave complex RPG elements, but will be a lot of fun for everyone else. 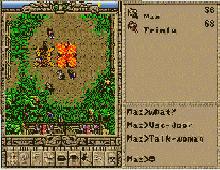