Second and unfortunately last in Origin's funWorlds of Ultima series, Martian Dreams is a great Jules Vernes-inspired Victorian adventure that combines the great Ultima VI engine with interesting characters and setting. The premise is intriguing: a rocket prototype was inadvertently launched to Mars-- with many 19th century celebrities trapped inside. You are part of the rescue team sent in the second projectile after contact was lost with the first expedition.

With the most famous celebrities of the 19th century such as Dr. Sigmund Freud as your guide, you must explore the mysteries of Mars and find a way to get home.

Martian Dreams is a highly original and atmospheric game, although it is reminiscent of Paragon's earlier Victorian space adventure Space 1889. Gameplay is similar to Ultima VI but with several pleasant twists and modifications to that game's engine. Simplified character statistics and few encounters with hostile creature makes this more of an adventure game than an RPG: the emphasis is clearly on exploration and interaction with other characters than on fighting. With a cast of characters that is both colorful and memorable, fun puzzles based on both scientific data and folklore about Mars, and a great interface, Martian Dreams is highly recommended to both Ultima fans and everyone else.

Note: An interesting anecdote from Paul Meyer, one of the lead programmers of the game: "This game featured vastly more, and longer, conversations than its relatives Ultima VI and WoU:Savage Empire, and we did quite a bit of research on the historical characters we included. The sheer quantity of conversation, in fact, was too much for our one writer to do and I ended up doing several of the conversations as well as my share of the programming."

The Avatar is at home on Earth when someone is at the door, it's Doctor Spector, he shows you some photos of the Mars space bullet launch and you and him are on an old photo. It seems you have to go back in time to avert disaster with the Martian colonists. You and Spector then find an old cave in Colombia, USA where Nikola Tesla was working on experiments. Tesla wrote a book on the Orb of the Moons telling you how to use the orb to travel back to 1893, the victorian era.

You create a red moongate that sends you back to the same cave back over 100 years ago where Tesla is working on his experiments, you tell him that you wrote instructions to go back in time, or at least will do. At first he doesn't believe you but then see's his own signature on the letter and then see's that you are telling the truth. You and you're friends are ready for the trip to mars on the space bullet, butit is fired two days early with the leaders of the victorian era onboard. It is your job when you get to Mars, to find a way off the surface and rescue the colonists on the first expedition a few years before this one. All of the story may seem a little confusing as I wrote it, but when you see the introduction on the game when you first play the game, you will quickly see what happens.

Martian Dreams uses the same engine to the first Worlds of Adventure - Savage Empire, which is the exact same engine from Ultima VI with a few enhancements. The game has some nice graphics and music, this time you actually get some Sound Blaster sound rather than PC Speaker from what you get on Ultima VI. Martian Dreams has some differences to the other Ultimas too, you can get some weapons like you could on the others, but you use mostly pistols, shotguns and rifles on your adventures on the martian surface. Since the martian atmosphere has very little oxygen in it, you will have to find some little rocks called "oxy rocks" which, when you put them in your mouth, can give you some oxygen for a limited amount of time. If you dont use them, then your statistics like Strength, Dexterity. etc. will not be as high as they can be because of the lack of oxygen in your body, decreasing your performance.

Martian Dreams is a good game, I found it better and more interesting than Savage Empire. It is definitly one of the most unique Ultimas of the series with an interesting plot and interesting characters. Again, this Ultima is not set on Britannia like on Savage Empire and Ultima II but on Mars for the entire game. You even have to reach into the far reaches of your dreams to find a way off the planet. 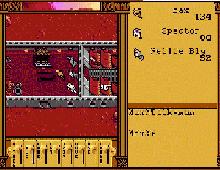