Dungeons & Dragons: Warriors of the Eternal Sun is a fun PC-style RPG for the SEGA Genesis console. Based TSR's D&D RPG system (not AD&D), the game plays like a "lite" version of Ultima VII. The premise: an evil beast called the Burrower has transported your castle into a strange valley with no apparent exits, a "...a strange, red-hued world in which the horizon slopes upward in all directions, eventually vanishing into a crimson haze at the limits of sight. It's as if the castle is at the bottom of a huge bowl whose extent can only be guessed at. Illuminating the landscape is the Eternal Sun - a fiery red orb that stands stationary in the exact center of the sky." As it is a matter of time before the castle's defense falls before the hungry horde of monsters, your only hope lies with a band of four heroes, sent outside the castle to explore the valley, find allies, and unlock the mysteries of the land.

Warriors of the Eternal Sun is a well-crafted RPG that adheres to the D&D rules strictly and effectively. Using official D&D rules, Warriors of the Eternal Sun is fairly unique. While there are many computer RPGs that use Advanced Dungeon & Dragons rules, very few games use original D&D. Fans of D&D will therefore be happy to see familiar monster types as well as a few new ones (such as the Beastman tribe). Weapons, spells, character types, all are genuine D&D material.

There are two separate engines used in the game. The first is an isometric view used when you explore the valley. In this mode, all combat is turn-based and a lot of fun to play (although not very challenging, since all you have to do is attack enemies from long distance with spells and arrows). When you enter dungeon, the game switches to a first-person perspective, where all combat is real-time (similar to Eye of Beholder series). The user interface is easy to use and never gets in the way.

Warriors of the Eternal Sun is a fun little RPG game. The graphics and sound are both good, and the story is quite interesting. The game is quite short and easy - something that might disappoint die-hard D&D fans, but on the other hand will entice novices to the genre. If you're looking for a fun RPG that's true to D&D rules but not overly complex, then give this old game a try. Recommended! 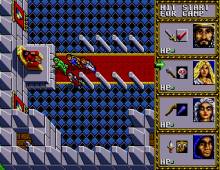