After Arcadia did a dismal PC conversion of Technos' arcade blockbuster Double Dragon, Technos USA wisely decided to choose a different company to do a PC conversion of the second game, Double Dragon II: The Revenge. The result is a much better and more faithful conversion that is fun to play, although still not the definitive version.

In this sequel, Billy and Jimmy Lee returning to exact revenge upon the killers of Billy's girlfriend, Marian. The game sports better graphics, more weapons, and much smoother animations than PC version of Double Dragon. Using the grenades is especially fun, although you have to be quick since it doesn't flash before detonating ;) Inexplicably, you cannot jump or kick when holding a weapon .. maybe an oversight on Binary Design's part. The control scheme is much better than the first conversion, although it's confusing because pressing the same key will execute different moves depending on the direction you are facing.

Overall, Double Dragon II is probably the best PC conversion of all three Double Dragon games. I'd still maintain that River City Ransom is ten times better than three games combined, though, but your mileage may vary ;)

In this sequel you up against more enemies and stuff. It's good that you still can sweep the with a whip or baseball bet. This games varies not a bunch with the first one actually. It's nice there is still a two player mode. The first one I really enjoyed together with my brother. 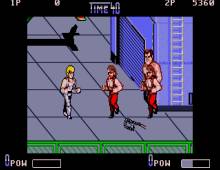 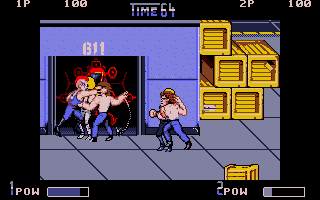