Oh yeah, I remember the Double Dragon series from my Amiga. We played those games for hours. Now I digged up a PC version of one of those games and happily I started it up. Hm... now what's this? I guess my memory isn't that good anymore. Your fighting options are somewhat limited, kicking, punching and jumping - aaaalright. Let me tell you - forget about the other options, you get along best with only using your kickjump. Mysteriously your player takes off for one of those and then you can let it kick left and right without him landing - although that proved useful I have never EVER seen someone doing this in real life ;) Unfortunately the fights often get very stupid - your enemy will knock you down and then wait for you to get up again just to knock you down once again, sometimes it's hard to get back into the game again, especially when there are more than one enemies standing around your unconscious fighter. Of course you can do the same with the enemies you know down, but you carefully have to knock all enemies down to one spot to keep them under control. Then you just stay there waiting for them to get up again and send them back to sleep with one of your kickjumps. It gets a bit boring after a while.

One of the nicer parts of this game is the background story - you are searching for three mysterious stones and are travelling to many different places - everytime you finish that scene that old man comes up to you telling you some more mysterious things. Well, the surroundings are good, the graphics are really nice for 1990, but as I said above - for a good fighting game your options are just too limited and the need to press 3 keys at the same time to achieve something doesn't really make this a good game. In case you don't find out yourself, the Shift-Key and Return act as Fire-Buttons, pressing them together and indicating the direction with the arrow-keys will make your player perform that kickjump I talked about. Sometimes it could also be a good idea not to walk, but just jump, but that's up to you of course.

Ask any longtime action gamer, and most will tell you that Technos' classic arcade classic Double Dragon series took a nosedive with the final game in the trilogy, Double Dragon III: The Rosetta Stone. The arcade version met with only lukewarm response, so naturally the NES version (which is always the best port), is still a lot less fun than the first two games.

That said, you shouldn't expect this PC port to be somehow better than the rest. And that's true, although it's ironic because this is arguably the most faithful PC conversion of all three games. The faults lie squarely with Technos for making poor design decisions, such as: you no longer can pick up cool weapons or power-ups to use at will, but must buy most of them in stores. So while there are interesting new power-ups including an item that makes Billy/Jimmy twice their size, you'll have to first collect enough money (by beating enemies of course) and THEN find the weapon shop, and hope that the one you enter have what you want. It's unnecessarily tedious, and unlike Legend of the Mystical Ninja, weapon shops are few and far between. Ironically, that turns out to be negligible, since the enemies have an IQ level of a rock. You can beat them very easily with jumping kicks and punches - like the first game, keeping the attack keys pressed is all you need to do.

The plot is also a dramatic departure from the gangster setting: now Billy and Jimmy Lee must find the Rosetta Stone to fight an evil in Egypt. The graphics and animations are much improved over the original, but that can't make up for repetitive gameplay. In short: a faithful PC port of a mediocre arcade game that ends a blockbuster series with a fizzle instead of a bang. 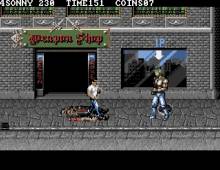 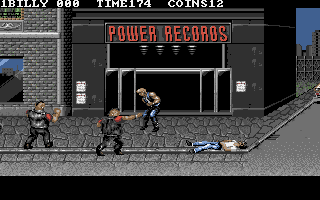