After starting on a good start with the first Teenage Mutant Ninja Turtles game, Konami fumbled the license with this inferior sequel, subtitiled The Arcade Game. The graphics somehow becomes so grainy and dull that you'll have a hard time telling each Turtle apart. Add quirky controls, uninspired plot, repetitive enemies, and boring levels to a long list of weaknesses, and you end up with a poor use of the blockbuster license. Fortunately, Konami would redeem themselves with a much better sequel, Manhattan Missions a year later. 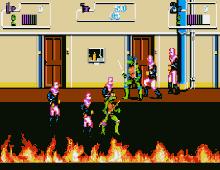