X-Men: Children of The Atom

One of the better fighting games for the PC, X-Men: Children of the Atom proves that the PC is indeed a viable platform for fighting games, despite popular opinion. In GameSpot's words:

"X-Men: Children of the Atom [is] an admirable and near-exact conversion of Capcom's 1995 arcade hit, which pits 10 Marvel Comics' mutant fighters against one another in a Street Fighter II-on-cappuccino-style battle to the finish. The impressively fluid animation of the arcade title is retained perfectly in the PC version, as is the audio and most of the gameplay. What's more, X-Men retails for a fraction of the cost of most PC games and will work fine on just about any modern machine. The look of X-Men translates marvelously in the PC conversion - the vibrant color of the arcade is completely intact, as is each and every lovingly hand-drawn frame of animation. However, the game runs at an unpleasantly low resolution and the frantic speed of the arcade is somewhat lost. Each sound effect and speech sample (the X-Men's voices are done by the same folks who speak their parts in the Saturday morning cartoon) is present, while the upbeat synthesized soundtrack rings loud and clear through redbook CD audio. X-Men: Children of the Atom is an aesthetically powerful package.

Surprisingly enough, those who mastered the game's six-button mechanics at the arcade will have a pleasant time using the keyboard alone. However, X-Men cannot be played seriously except with a multibutton gamepad of some sort, through which it controls pristinely. Special moves can be unleashed with surgical precision, and above all else, the game feels just like the arcade. And yet, a terribly important facet is left unattended: the ability to string together multiple punches and kicks into massive custom chain combos is conspicuously missing. And, to add insult to injury, the computer opponent will use those chain combos on you without hesitation even though you cannot use them to retaliate. A simple patch to fix this problem would make a world of difference for arcade purists.

As is, X-Men: Children of the Atom serves up some killer one-on-one martial arts action that's more than enough to tide over those looking for a quick fix of fists and foul play. Fans of the arcade game will be disappointed by the missing chain combos, but others won't mind for even a second, as they'll be enjoying X-Men's slick visuals and cool character designs and wondering all the while as to why the PC doesn't enjoy more games of this category." 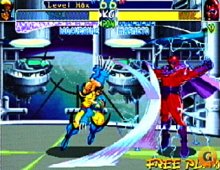 X-Men: Children of The Atom screenshot