X-Men: The Ravages of Apocalypse

id Software's perennial favorite Quake has probably seen more unofficial add-ons and enhancements than any other game. Those of you who play on their servers over the Internet are probably familiar with improvements such as the grappling hook and runes, made available thanks to John Carmack's open-source design that allows virtually unlimited modifications and add-ons to the engine. X-Men: The Ravage of Apocalypse is the first commercial "total conversion", i.e. a brand new game based on the Quake engine. Although you must already own Quake to play X-Men: RoA, that requirement is merely a mean to guard against piracy rather than a technical requirement for add-on disks. X-Men: RoA boasts new characters, new locations, new plot, and new weapons - in short, it is a total remake of Quake. The game is very well coded and entertaining, even if it neither quite matches the adrenaline rush of id's classic nor leverage the X-Men license to its full potential.

In an interesting twist to the genre, X-Men: RoA doesn't cast you as an X-Men, but rather one of evil Magneto's cyborgs who has just been captured by the righteous vigilantes. In single-player mode, you fight through 6 levels to get to Apocalypse, and then go through 5 more levels to take out Apocalypse's mysterious ally. Multiplayer mode allows you to choose from 12 different X-Men in Deathmatch mode and to use the respective character's superpowers.

If you like Quake (and who doesn't), you will probably like X-Men: RoA, because it uses the Quake game engine and has all the playability of the original. The new weapons improve on their predecessors; for example, the rocket launcher not only shoots 2 rockets at a time, but those rockets also home in on their target. The grenade launcher shoots grenades rapid-fire, and there is a new super gun that uses 100 cells but can clear a room in one shot. Although the weapons are better, your opponents are much more powerful: you battle the X-Men themselves, and one rocket blast is usually not enough to kill them. Some of the characters, such as Bishop and Wolverine, take forever to kill after a long, drawn-out battles that require both skill and endurance to survive. Female X-Men such as Rogue and Storm seem much easier to dispose of, but that may just be my imagination ;)

Graphics-wise, X-Men: RoA looks great. In contrast to the dark, gothic colors of Quake, levels in X-Men: RoA are much more colorful and diverse. You will battle in a pyramid, the suburbs, a powerplant, and several fortresses. When you get to Apocalypse himself, you will be face to face with one of the most intimidating "boss" characters of all FPS games. Think the hydra in Half-Life, and multiply the size by ten to get an idea of how formidable Apocalypse looks. The X-Men themselves are nicely rendered in true comic-book form, with all their trademark weapons and snide remarks.

Player interface for X-Men: RoA is intuitive and takes no time to learn if you know how to play Quake. The game's overlay will not alter any of your pre-existing Quake config files, so most commands remain the same. In multiplayer modes, especially Deathmatch, X-Men: RoA adds a whole new element of variety: some characters can regenerate, others can fly, and others have special abilities such as freeze - and since these abilities belong to the X-Men, they can't be lost like power-ups in normal Quake. With huge single-player missions and a great variety in multiplayer, X-Men: RoA adds literally hundreds of extra hours of gameplay, and breaths a new life into one of the best games of all time. 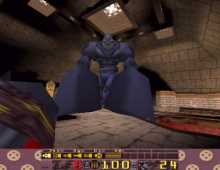 X-Men: The Ravages of Apocalypse screenshot