One of the best superheroes action games ever made, Manhattan Missions is the third game in Konami's line of platform games based on the lucrative license. The third time is really a charm for this game, as the Turtles finally come to life in colorful graphics and a good number of special moves that are unique to each Turtle. There are a lot of enemies and cool power-ups, and great options such as the ability to choose which locale to battle next, and a training mode in which you can practice each Turtle's moves against different enemies. Although most missions occur indoors at various locations in Manhattan, New York, they are quite different from each other, and you will also have a chance to battle in exciting locations such as aboard a subway train, or in the sewers. Konami finally did the license justice with this game-- a must have for all TMNT and action fans alike. 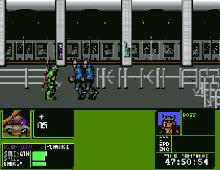