Double Dragon is a disappointing PC version of Technos' classic beat'em up series that were very successful in the arcades and on console systems. The plot, if you haven't heard of this blockbuster before, goes as follows: Billy and Jimmy Lee must rescue Billy's girlfriend after she is captured by Mr. Big and his gang. One or two players can play as Billy, Jimmy, or both rowdy lads as they fight hordes of gangsters who get in their way.

Okay, let's just ignore the graphics: nobody should expect a 1988 EGA game to rival the arcade original anyway in that department. But what's really disappointing about this PC conversion is that the smooth, addictive gameplay of the original is left far behind. Sure, you can still do a wide range of moves that made the game an arcade sensation, including elbow attack, face-in-your-knee slams, jumping kicks, various weapon throws, and the standard punch and kick. The range of weapons is similarly impressive: you can use baseball bats, whips, crates, and trashcans to name a few. But the actual gameplay elements such as enemy intelligence and user controls leave a lot to be desired.

Although the game has all these cool attacks, you'll be frustrated if you try to pull them all off. It's just not intuitive at all. Worse, supposedly powerful attacks like the jumping kicks don't seem to do much damage to the enemies, and they are hardly needed in the game because all you need to do is keep the punch key (or joystick button) pressed - enemies will fall like leaves right in front of your auto-fire punches. Character animations are also very choppy, and this can't be excused by citing "hardware limitation" because many 1988 and older games - most notably Quicksilver's excellent PC versions of Data East's classics like Karnov and Guerrilla War - boast smooth animations and near-flawless gameplay.

Overall, if you're a fan of the original classic, you'll be disappointed at this spiritless PC version. I suggest you play the original arcade or the NES version on emulators instead and leave this version alone. Better yet, just forget about this whole series and instead play the NES version of River City Ransom, a severely underrated gem that is superior to Double Dragon in every aspect.

It's an arguable point that Double Dragon started the whole beat-em-up genre. You know, the type where you control some character who has to wander through a town and beat the crap out of every bad guy nearby. It's even more startling when you learn that the game that started it all really isn't all that impressive.

As the opening screen states, Marian is standing in the middle of the street when a big bad dude comes up, slugs her in the stomach, slings her over his shoulder and takes her off. This evil gang (supposedly being led by the hero's brother Jimmy), for whatever reason, decided to capture her. Well, as Billy Lee, you're off to rescue your girlfriend.

The game's a simple walk forward and smash the crud out of any bad guys. However, this is Tradewest's version of the arcade hit. The most glaring omission is the lack of a two player mode. Yep, this is a one player only affair, so don't expect to plow through the bad guys with a friend. To compensate, a tournament mode is included that allows you to pick one of the game's characters and pit them together in a small enclosed arena. These scenes can be played in two player, although the game simply ends once one persons dies...there's no continuity in this mode, just quick bursts of fun. They also play a bit differently, with different sets of moves and the ability to run. It's nice to play as the enemy characters, and everyone is drawn quite a bit bigger and better looking than in the actual game.

Another interesting twist is that Billy Lee gains more techniques as the game goes on. Each time you hit an enemy, you get some heart points. Once that number reaches 1000, you gain another technique. Although this is an interesting way to introduce new techniques, it's kinda stupid to start the game without the ability to jump kick. Some of the moves are rather cool though, like punching enemies in the face when they're lying on the ground. If that wasn't enough, Tradewest added a couple areas in the game that weren't in the arcade version (like the cave in level 3.)

The biggest gripe I have about this game is the way it's controlled. In many beat-em-ups, once you landed a hit on an enemy, he/she remains stunned until you deliver another hit. Not so here. Punches barely seem to stun bad guys and they often return the favor before you can dodge. Similarly, two people can punch each other at the same time inflicting damage. Since you're limited to three lives, simply punching and kicking enemies (especially bosses) will get you killed before far, so the next viable move is the jump kick. But too many enemies duck your attacks and hit you from the back. Since you'll get hit so often, you'll spend more time on the ground than you really want to. Additionally, weapons disappear very quickly in this game (and some don't give heart points) so you don't have much of an opportunity to take advantage of them.

Graphically the game is a bit cartoonish, except as mentioned above in the tournament mode. The opening title and first level tune are quite good, but everything takes a real big nose dive at level 3. There's one spot that sounds like a radio tranceiver gone haywire for about ten seconds. I just have to wonder what the hell the composer was thinking when he put this section in. The sound effects are the generic punches and thuds, nothing special really.

Double Dragon isn't necessarily a bad game...it just gets boring constantly using two moves against enemies, most of which they dodge and counterattack anyway. There's no continuing either, so once you lose all of your lives, it's Game Over for good. All in all, Double Dragon is good played in a 15 minute time periods. Otherwise the action will become too repetetive to really tolerate for a long amount of time. You probably won't survive much longer than that anyway. 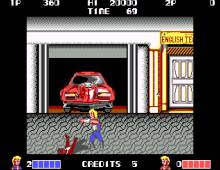