World Tour Tennis is the definitive version of Distinctive Software's excellent tennis game that began life as 4D Sports Tennis in 1990 and improved for the subsequent promotional game Compaq Grand Slam Cup in 1992. In World Tour Tennis, Distinctive's excellent wireframe/polygon graphics engine culminated in very smooth graphics and much more graphical detail than the previous 2 games in this series. For starters, all stadiums now have full background graphics and crowd animation, as well as much more realistic sound effects and player movements.

You can still play the game in multiple modes including practice, exhibition, and tournament, each of which has many more options than before. The best addition to the game is the career mode, which lets you create your own player and guide him/her through various tournaments, collecting "career points" along the way to become the world's best tennis player. In career mode, you can view calendar of matches that are scheduled for each tournament, and choose which tournament to participate in. The practice mode has been vastly improved to be much more useful: you can now choose specific types of drills, and read the game's comments on your performance and suggestions for improvement. World Tour Tennis also records detailed statistics from each match, and viewing these stats is a crucial way to discover your weaknesses and strengths.

If you like tennis, World Tour Tennis is simply a must-have. Its realistic player movement and ball physics make the game much better than most recent 3D-accelerated titles - and the wireframe/polygon graphics actually doesn't look too bad at all once you get used to it. 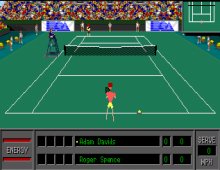