In this well created Tennis game you have the option of playing an Exhibition Match, Tournament, starting a Career or even just Practising your serves and shots. You have the choice of a few players, courts, locations, and you can even control the camera angle shown when playing. A very well done game for its time.

Although the game's hallmark is the smooth 3D graphics that make the players' movements very convincing, 4D Sports Tennis also includes many options that qualify it as a sport simulation rather than a simple action game of tennis. You can create a player from scratch with detailed RPG-style statistics, such as allocating points for his or her maximum speed, acceleration, and endurance. These statistics will gradually increase with training and experience on the court. You can also change your player's looks, height, weight, and handedness-- all of which are reflected appropriately (increase the weight, for example, and you will see your player become more chubby). You can play in practice mode, an exhibition game, join a tournament, or --best of all-- design a complete 5-year career for yourself by selecting what you would like to do in each month of every year (e.g. practice, compete in the Italian Open, etc.).

On the court, you will be amazed by the players' life-like movements and realistic ball physics. Players even lower and sway their knees in anticipation of the opponent's serve-- much like their real-life counterparts. Mouse-based interface takes some getting used to, but will prove very intuitive: mouse buttons control the racket, and moving the mouse controls your movement. If you dislike playing from the first-person perspective, you can hit ESC to bring up the Options menu, and change to behind-the-player camera view. You can even adjust the camera's position and angle to your liking, as well as save any replays of your favorite shots to watch later. During the game, you can view each player's profiles, and browse various statistics that are automatically recorded, such as the number of aces, backhand winners, % of points won on first serve, and so on. You also must keep track of your energy level, since exerting too many volleys and fast balls can eventually make you too tired to run for the ball.

Overall, 4D Sports Tennis remains today one of the best tennis games ever made. The lack of doubles mode and audience are just about the only two things that are missing from the game. If you're looking for a realistic, highly playable tennis game that is very challenging, look no further.

Unfortunately, this game has been rather unsuccessful. The game was part of a very small 4D sports collection along with 4D sports: boxing. Still, I'm not very sure if it was just underrated or if it just didn't have it.

Featuring a very nice 3D engine which could really stand out in its time, the movements and physics of the players are really revolutionary, which could actually make this game worth playing. Though, it didn't look that shining and you could even say the game looks boring. It would have been nice if the developers would have put that little bit more into the graphics rather than the engine.

But the engine really amazed me if you keep in mind that this game was released in 1990. Players are actually moving alot like real tennis players move in real life, which makes me feel they've put alot of time into making this one realistic.

Still, for the gaming fans, games like Tennis Elbow will make your gaming experience alot better, but for the real die-hard tennis fans, this is absolutely a game that you should try and might even catch you playing in its career mode for quite some time!

Now this is what I call a tennis game. This game differs from other tennis games because you play this game first person! You can play with a mouse or with the keyboard. It takes quite a while to get grip on how to return a ball, but once you know how to do that this game was worth the download. 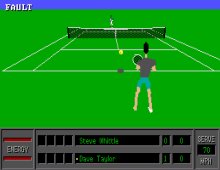 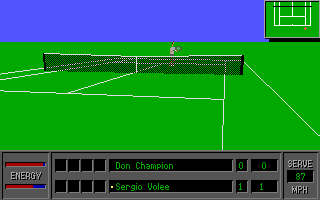