This game was made in 1991 but not a single boxing game has ever even come close to it's perfection and entertaining gameplay!. 4D Boxing is probably the best boxing game ever made and one of the best sports games in general! You will start of as a rookie boxer with a great future. Player creation is quiet easy - give him a name, set some minor things such as height, weight (this determines the category of your boxer), the hand he uses the most (right or left), colors of his shirt and shorts and things like that. After the boxer is created he will be placed on the last, 51st place on the ranking list. You will get an option to fight 3 fighters that are in front of you and start your career. Before each match you will get some training and raise your stats until you become strong enough and ranked enough to challenge the Champ himself. After you beat him the game is complete and you win. This might sound easy but it isn't. I played this game for ages over and over again and never could beat the ace. I finally made it after some time but it took me a lot of training and hard work to achieve that. Even after I completed the game I still played it since it really is fantastic. The graphics in the game are something special. The view is isometric, and everything is drawn in polygons. You can view the game from a normal third person view, from the first person view, lined third person view and even through the eyes of your opponent! Something that I've never seen before or after this game. 4D Boxing is the game that will keep you glued to your chair for a long time. It is very entertaining and you will always come back asking for more. You just have to play this one! Note: Be careful - after about 40 matches, your fighter starts getting old. You must be fast!

I know - this one looks weird at first - fighting polygons... Yeah, but it's the best boxing-sim I ever played. The controls are very good, the strengths of your boxer show effect. It's important to train him (or her) right. The various computer-played opponents act different. The motivation is high to play on and on. I played the whole career of my boxer on one day, I fought almost 50 fights and brought him up to Rank 7 - he got too old then and so his career was over. He was almost unbeatable - perfect in all attributes. Too sad that he never got the chance to fight against the champion... Well, there will be a next career. The game is highly configurable and you can even fight in 1st person-view.

A great game where you can see the effort of the programmers to build in as much realistic elements as possible while providing a maximum of fun. I just discovered this game, but I am sure it will stay on my harddisk for years. 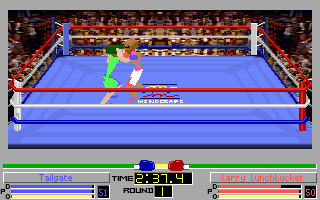