A relatively rare version of Mindscape's classic tennis game 4D Sports Tennis, Compaq Grand Slam Tour is identical in every respect except for digitized photos of real-world courts that make up the Grand Slam (Wimbledon, US Open, and French Open) as well as the trophies. The game also seems to use a more updated version of the 3D engine used in 4D Sports Tennis, although I am not 100% sure about this (the players do seem to move a bit more smoothly, though). For a more detailed review of gameplay, please read my review of 4D sports Tennis because it is virtually identical ;) Definitely a must-have tennis game for fans of the sport. 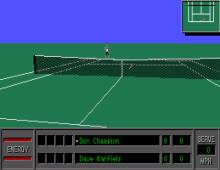