The breakthrough of hockey games. The idea of having a new, zoomed screen when shooting at the goal is fantastic! What am I talking about? Download Face Off and see it for yourself. A classical sport game in which you have to choose your team and lead it to the NHL championship title. Give it a shot.

A great ice hockey game developed by Canadian sports games experts MindSpan (makers of Hardball series and Joe Montana Football). Faceoff! was MindSpan's first game, and was instantly touted (although not loudly enough in my opinion) as one of the best ice-hockey games of its time for the IBM-PC.

What makes the game an instant classic? Although good graphics doesn't guarantee a good game, great graphics goes a long way toward making an ice hockey game an action-packed, "total immersion" experience. And immersion is what Faceoff! offers in spades. Even more so than Konami's classic Blade of Steel, Faceoff! offers very fluid controls, excellent player animations, and just a lot of atmosphere-- including very good fighting interface for this essential part of real-life hockey game. There are some coaching options which are adequate, although of course not as extensive as complex hockey sims such as Hockey League Simulator. Faceoff! delivers a great you-are-there experience that all hockey fans will enjoy.

One of my favourite hockey games. Yes, I'm very sure about that! Ok, maybe the newest hockey games look a lot more spectacular and have lots more in them, but I really like this one... It doesn't run smoothly on my pc, but that doesn't matter. Unlike many other games, this game doesn't give many detail, all the hockey players look the same, for example.

But the hockey rules are done very well, you can choose for Aussie rules, full rules and relaxed rules. The ingame music is also as it was copied from a real ice hockey game and the field lines and stuff are realistic as hell.

All by all I am very enthousiastic about this game and I most certainly recommend downloading this one! 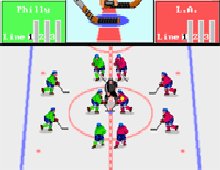 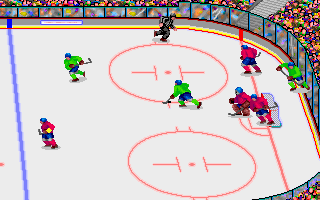