One of the best action-oriented hockey games ever made, this 1995 version of Accolade's Brett Hull Hockey series is widely regarded as the best game in the series, even though two more sequels would be made.

Fans of console-based hockey games in particular (e.g. Konami's Blade of Steel, and even the SNES version of this game) will be pleasantly surprised with the game's fluid animations and outstanding controls, especially with a gamepad. The game features over 600 real-life NHLPA pros, thanks to it being fully endorsed by the association, each with his own set of attributes (e.g. skating ability, aggressiveness, shot accuracy, and strength). Fights, which no hockey game can do without, are realistically bloody, with a surprisingly wide range of punches you can make. Famous commentator Al Michaels calls the shots with his distinctive booming voice, and you can view instant replays of wrap-arounds, blue-line blasts, crushing checks, and more. Game length is very flexible: you can play a full 84-game season, half-season, 11-game short season, playoffs, or exhibition games. And lest anyone bemoan the lack of simulation-style options, Brett Hull 95 does not disappoint. You can customize up to 4 lines for offensive and defensive situations, and keep track of breakaways, one-timers, and even power-plays for in-game statistics.

Whether or not you're a diehard hockey fan, Brett Hull Hockey 95 offers addictive action that rivals (and IMHO even surpasses) EA's better-known NHL Hockey 95. 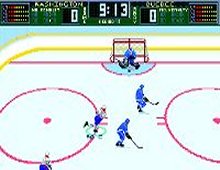