One of the best hockey simulations ever made, Bethesda Softwork's Hockey League Simulator 2 allows you to design and manage your own customized league, or create current or classic leagues from the past. There are more statistics in this game than many other sport sim combined, all of which can be modified to your heart's content. Don't like how a team is playing in your simulated league? Fire its head coach, and take control.

The game is similar to its predecessor, Hockey League Simulator, except that there is more of everything -- and this time it was designed to be integrated with Wayne Gretzky Hockey 3. Similar to HLS, HLS2 boasts an extremely wide range of options that are remarkable for its time: you can coach any one particular team, or manage the entire league. Match results can be saved or printed, and the number of statistics and players you have at your disposal is staggering. Once integrated with Wayne Gretzsky Hockey 3, you will have one of the best hockey action / managerial experience this side of the real rink. Highly recommended! 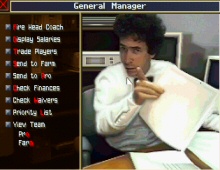