Best of the Best is an excellent but little-known sequel to Futura's outstanding Panza Kick Boxing. It was curiously released with the subtitle "Championship Karate" in some countries, despite the fact that the game is still about kick boxing.

Although Best of the Best looks identical to its predecessor, it features better graphics and several new options such as street fighting. The boxers also move more smoothly than in Panza, and there are more opponents for you to spar with. The training gym is still included for you to practice as much as you want before the match. Overall, it's a great sequel that features more of all the good things about the previous game—something not very common nowadays. Highly recommended to aspiring pugilists everywhere ;) 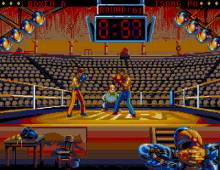 Best of the Best (a.k.a. Kick Boxer 2) screenshot