A surprisingly well done conversion from the Amiga version means that Panza Kick Boxing looks as good also is the exact same game as seen on the Amiga. It is one of the few games focusing on the less known kick boxing sport and it does very well in this.

You can build your character in the game both during the matches but also in the gym where you can also customize your boxer. During a boxing match there are several different moves to choose from and the animation of the characters are extremely well done as well. The sounds are great as well and the developers have tried to copy over as much of the music from the Amiga version as well which is different than many other conversions that have been done from the Amiga format to the PC format. These have often ended up with EGA graphics and poor PC speaker sounds. This is not the case with Panza Kick Boxing at all.

A well done game and at least in my opinion the nest kick boxing game ever made simply because of the well done graphics, character development and the match engine included. If you are looking for a good fighting game you can't go wrong with Panza Kick Boxing and you will find out that there are many hours of gameplay with this game.

Panza Kick Boxing is a very nice PC conversion of the classic Amiga kick boxing game by French company Futura. Probably one of the best fighting games ever made (and one of the few Thai boxing games in existence). Features good smooth animations, easy but still complex enough controls which make up for great gameplay. The character development option with a training gym, where you can improve your boxer's abilities is also very nice - as is the option to customize your attacks. The PC conversion even features all the samples from the Amiga game including the cool title tune by Michel Winogradoff. Sadly, there is no soundblaster driver for them but just sample-drivers for the PC speaker and adlib sound card.

The game has some problems on modern computers such as the demo showing up after a couple of milli-seconds on the menu screen, giving you hardly any time to choose the various options. A slow-down util might help.

Note: if you like the game, also check out the better but lesser-known sequel called Best of the Best, also on this site :) 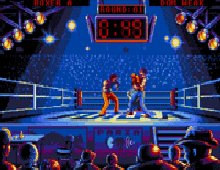 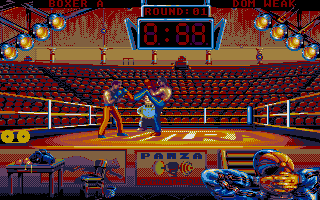