Nice follow-up to Loriciel's tennis game Tennis Cup from 1990. Gameplay has been nicely improved in this one, so finally you can also produce good strokes and winners more often from the baseline, than just from the net. Another major flaw in the predecessor was the split-screen mode in solo matches. Thankfully, it can now be turned off in this sequel. Game options and graphics are very similar but a few animations have been added, and, of course, they are as nice as in the first game.

In short, Tennis Cup II is another good job by Loriciel's lead designer Dominique Sablons, who also also adds support for the adlib music board (didn't get that one to work, though). Overall, a good tennis game, fixing many of the weak points from the earlier game and improving a bit on the strong points. What could you expect more? Recommended!

The meaning of this game os obvious: Play tennis and win. The interface is nice; walk your player in the field to the different stuff you can do: demo, play actually tennis, go to the options, etc. The graphics are superb. 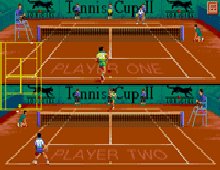 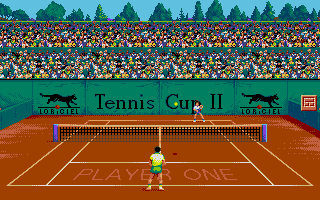