Cinemaware's TV Sports series is well known. TVS Boxing puts you in role of a boxer and his manager/coach in the same time. You can practice, arrange training matches and fight for champion as well as many other things on your path of glory.

The game is quite good but the actual fight cound have been done a bit better. It is sometimes very hard to control your fighter. All in all - nice game.

Cinemaware ended its acclaimed TV Sports series on a high note, with a game that remains one of the best boxing games ever made. TV Sports Boxing lets you create your own boxer from a wide range of body color, hair color, trunks color, and boxing style. You start with a fixed number of skill points which are used toward selecting you boxers skills, which include punching power, stamina, conditioning, strength and cuts. You start with a team of trainer and promoter. When you make money from winning bouts, you can hire better trainers and promoters.

Your goal is to fight your way to higher rankings and eventually champion. Your promoter will suggest opponents, but you can accept or decline hoping for a different opponent. The higher ranking your opponent is, the more money you make from a fight. Win a fight and your ranking will go up, lose and it will go down. The fighting itself is a lot of fun and requires skills as well as reflexes. You learn what your opponents weaknesses are and exploit them. The boxers are represented on screen with excellent digitized players who display convincing motion when they swing hooks or uppercuts, and it is easy to tell when your boxer is taking a beating.

With fluid animation, lots of atmosphere that is Cinemaware's hallmark, great control interface, and a wide variety of opponents that truly use different boxing styles, TV Sports Boxing is a must play for every boxing fan. 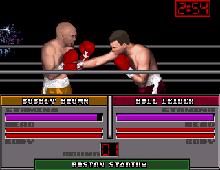