I admit - I love management games. Ever since I played Track Suit Manager on C64 I simply fell in love with them. Most of the time they were football managers, and this time it is a new sport - boxing! I could never believe that Boxing management game could be so fun.

At the start you have to sign a contract with 1-5 young, promising boxers and lead them to glory. You will then arrange fights, train them in the gym, watch their performances, get a lot of money and other fun stuff. This truly is a great game and I recommend it to all manager wannabes!

World Championship Boxing Manager puts you in control of up to 5 boxers. You must use your skills as Manager/Promoter against the computers artificial intelligence, which controls 17 managers who together have 100 boxers under contract.

A warning, the expectations of your boxers are high, you will need to utilise all your negotiation skills in this award winning simulation to secure bouts against rated boxers, which will increase the world ranking of your fighters on the road to becoming champions of the world.

World Championship Boxing Manager (WCBM) is a great sport game by Goliath Games that not only pioneered the niche genre of boxing simulation, but also stands today as one of the best games of its kind ever made.

WCBM puts you in control of up to 5 boxers. You must use your skills as Manager/Promoter against the 17 computer-controlled managers who together have 100 boxers under contract. In addition to tactical acumen that is required in most simulation games, you will also need strong negotiation skills to secure bouts against rated boxers, which will increase the world ranking of your fighters on their long, arduous road to becoming world champions.

Your routine job as manager is to scout for new talent and court them to sign contracts with you, and prepare your boxers prior to each bout. You can plan each boxer's training schedule in detail, and different activities realistically affect different statistics. For example, running improves stamina, and weight training improves strength. Certain injuries may occur during training, e.g. sparring may result in a cut, or weight training may pull a boxer's muscle, forcing you to postpone a fight.

During each bout, your role is to plan the boxer's tactical moves and counter the opponent's strategy. You must also keep an eye out for your boxer's damage and tiredness levels, and "repair" him as necessary between rounds. Part of the fun in WCBM is gauging the judges' impression of your boxer's performance. There are three judges, as in real life, each with individual personality and his own style of scoring. To make the game more challenging, boxing commentator in the game also colors the match with his own opinion. You must rely upon biased opinions from Eddie the Expert, make your own assessment during the fight, and hope that it agrees with the judges' opinions.

With a lot of tactical and strategic options, innovative gameplay including individualistic judges and emphasis on negotiation skills, WCBM is no doubt one of the best boxing simulation games ever made. If you are a boxing fan, don't pass this old game up. 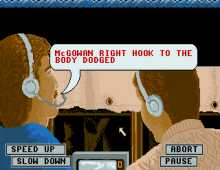 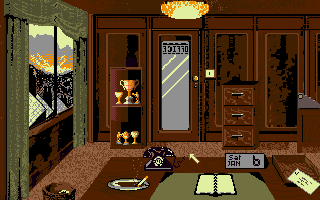