One of the most underrated soccer simulation series of all time is back, and this time is arguably a better game than venerable Championship Manager 2. USM 98 contains data for the 7 biggest Euroepean Leagues: England, Scotland, Italy, France, Germany, Spain and the Netherlands. That's over 400 clubs and around 12,000 individual players, all with appropriate skills and stats. Although very similar to Championship Manager in terms of epic scope and a multitude of options, it is better for one thing: a statistics editor. This allows you to edit the teams and players to keep them up to date, something that is a very nice touch and not seen in soccer management sims until much later.

In addition to new features that set the game apart from competitors, USM 98 boasts one of the most detailed and realistic transfer systems ever devised. Similar to business games such as Hollywood Mogul, the game requires you to negotiate with the club and the player's agent. You can loan, buy, or exchange players-- and even offer extra cash if the player plays more than 15 matches for example. You can have all six European leagues run at the same time, which opens up the possibility of not only player transfers but also management offers from clubs in Serie A. The game offers two play modes: either full-management (running the entire club from advertising to pricing snacks), or coach (football elements only). There are numerous other nice touches, such as the excellent tactics editor, post-match newspaper reports, and a much-improved interface that is more accessible for beginners than the esoteric interface of CM2. Although there are a few shortfalls, such as the limited number of available players for transfer, and the apparent ease of play-- it seems you won't get sacked no matter how badly you are managing the team, USM 98 in all other respects is the game that equals --or even *exceeds*-- CM2. If you are a soccer fan, this is a must-have.

Note: If you like the game but feel it is a bit outdated, I highly recommend Mega Update pack: the most comprehensive update of game roster for 2000/2001 season play. The 600KB file contains literally thousands of transfers, newcomers, and more. 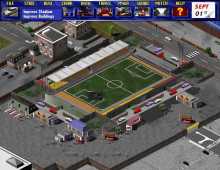