This is one of those so called "easy football management" games. Unlike Championship Manager (which is definitely the best game in the genre), PM3 is more focused on acquiring the best players that will guarantee you to win all the competitions and be the best manager in the world. Still, this is not as easy as it may sound.

Premier Manager series focus on one league only - English Premier League. As the game starts you will select your team and input your name. Then you can buy players, sell them, train and acquire new coaches, build or improve stadium, select ticket prices and just about any single thing you can think of when it comes to football. Good luck!

Premier Manager 3 is one of the more well know football manager series and continue from where the first games in the series stopped. Premier Manager 3 is offering quite a list of different features and options in the game including sponsorship management, stadium improvements, staff management and of course the regular tactical challenges.

The interface is nice to look at and also very easy to use. While I'm not a big fan of any manager games where you have to take care of the stadium, sponsorship negotiations etc (think of that Alex Ferguson had to main Manchester United completely alone) these features have been implemented well. As mentioned I have a hard time to see the use of these features though since it makes the game more than just a manager game then.

The tactical part of Premier Manager 3 is poorly done though as it is only possible to win with very few of the available tactics. At least for a hardcore fan like me of this genre this makes the game much less fun. There are some good things included in the game though the good list of different skills for each player, updated real player names (for the time the game was published) and an easy to use match engine where substitutions can be done easily. Premier Manager 3 is overall one of the better manager games but doesn't reach the Championship Manager series in tactical game play. It is still better than the first two games in the series though.

Third in Gremlin's effort to dislodge Championship Manager from the throne of soccer management games (SMG), Premier Manager 3 is a good try that unfortunately falls short in many areas, particularly unrealistic match results.

"PM3 simulates the English league, in which there are 5 divisions (Premier, Divisions 1, 2 and 3, and a 'non-league' Conference Division full of part-timers). At the outset, you can only take the manager's job at any one of these 22 Conference teams; it's a pain not to be able to control your favourite league team, but it's probably more realistic this way.

There's no particular 'aim' in PM3; you might try to take your Conference team all the way to the top, or you might look to get the manager's job at your favourite team if it comes available, or you might just choose to stick with clubs in the Conference division. The game runs season after season; you only 'lose' if you get the sack from your current club - there's no real way to 'win'. It is in that sense a simulation more than a game. But PM3 does give you three ratings: managerial, supporter confidence and director confidence. Letting the latter slip too low will get you the sack (getting a public vote of confidence from the directors is bad news!).

PM3 isn't just about picking a team and hoping for the best. It's an incredibly deep game, with a vast array of statistics, options and things to tweak. In fact, you control a lot of things that a real manager would not; for example you decide on spending on ground improvements and on raising income from advertisements and bank loans. However, there are still directors above you. They can be persuaded to give you money to spend, but their main job appears to be to decide when to sack you!

Overall PM3 is trying to be a very good soccer management game. What it lacks in presentation (particularly the in-game graphics) it tries to make up for with depth of gameplay. However, I'm not convinced as to just how realistic that is. While it appears my players act in ways that they are being asked to, they'll very rarely deviate from precise instructions; thus for example my number 9 who plays in front of goal scores 4 out of every 5 goals for me - far from realistic....PM3 is arguably the best of a bad bunch, and in its own cute way it is addictive and fun to play in quiet moments. Its long term appeal would be greater if I could choose which team to manage, if I had more faith in its 'realism' and if the in-game graphics were presented in a style more in fitting with the 1990's rather than the 80's." Overall, a solid and deep SMG that falls a bit short off Top Dog status. If you like the series, though, check out Premier Manager '99-- a much better successor that gives Championship Manager a run for its money. 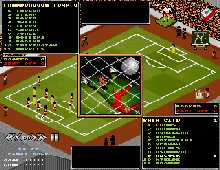