TV Sports: Basketball used to be the best basketball game until EA Sports launched it's NBA Live series (1995). Select a team and try to win the ring. There are many features in this game that have never been see before. One of them is player editor which makes the game even more interesting. The complete NBA season is covered with detailed statistics and will keep You coming for more over and over again. Cinemaware had some real good games while it existed. TVSB is one of their biggest hits and should not be forgotten.

One of the best basketball games I have played on the Amiga. Too bad that the PC version isn't that good although it's still quite playable. You can control all the best teams from the NBA with accurate players statistics and player names but of course based on the 1990/1991 season so you may not be familiar with many of the names unless you are a true basketball fan.

You can choose to play either a single game or play a full league. Of course the game offers two-player mode as well including very easy controls that are just the arrow keys for the regular human player. Playing a the leagues mode is of course the most fun but also very time consuming since a single match takes quite some time to play.

Actually only three game screens are used during a match. You either attack or defend around the basket. When you get the ball the computer automatically move all players up to the last half of your opponents half, which is actually a good thing all though it might not sound like it. But I like that you avoid moving all your players up at the other half of the match field. The graphics is the thing that gets the game up including the good but simple sound as Basketball games often have problems with the size of the match field compared to the actual players. Overall a great basketball game.

Welcome to this evening's match - Indiana against the famous Keep Allstars. The Keepians get into the match fast taking the lead with Elwood scoring the first goal. But Indiana's not to be underestimated - they soon catch up and take over the lead. Coach Keepmaster gets out his best man Skree and when everything seemed to be lost just seconds before the end of the first quarter with Indiana leading 23:19 Stacy scores a 3-pointer as well as getting a free shot for being fouled. And there it is! 23:23 - the Keep Allstars get a tie!

There isn't a single sports game with more atmosphere than the TV Sports series. It's highlight has always been TV Sports Basketball. The gameplay is kept simple with no big running around - you are either defending or attacking - everything in the boring middle is not important. The team leaving one scene with the ball will end up on the other side with it as well. While this might not be realistic it does not give boredom a chance. You might curse when the computer scores and you weren't able to do anything against it, but scoring yourself is always possible - and there is always a chance to get back into the game. The stats of each player come into consideration as well, but it's not overly important to a ridiculous point. When your players miss too often call for a time-out and replace them by some of their fresh teammates. However - try to let your better players play more often. The scene above was how it really was - once I brought my player Skree out on the field we were back in the game.

Oh right - you guessed it - you can edit team and player names. This game might not be the most accurate simulation of a basketball match - it's sure fun though. You can also play this with a friend. Overall one of the alltime greatest sports games.

TV Sports Basketball is, without a doubt, Cinemaware's best sport game and one of the best basketball games ever made. Everything that we've come to expect from Cinemaware is included in the game, from the amazing opening sequence to the announcer's previews, to being able to edit all aspects of the players attributes.

Although great as a one-player game, it is much more fun playing human opponents. Those who are reflexes-impaired can choose to only manage the team and watch the players carry out their strategies on the court. There's the option of playing against each other or playing on the same team with each other. You have the option of controlling a specific player or whatever player has the ball. Joystick control is excellent, its very responsive and easy to pull off different kinds of shots. The better your players shooting attribute, the more accuracy of his shot. You can even pull off some razzle dazzle when close to the basket. This can include slamdunks, to full body turning slams. You can even alley oop. The game is about as realistic as possible for computer basketball. The graphics and animations are great, but it's the sound that adds all the atmosphere. You can actually hear the squeeks of the players sneakers! Another great touch is the crowd sounds. If you're the home team, you will hear cheers when the team is doing well, the better you play, the louder the cheers. Start to play bad and the crowd will actually boo you. Although there is some luck involved in shooting, there is also plenty of skill involved. You must substitute players at appropriate times and know when to pass and shoot. In conclusion, I have to say that this is one of the best sports simulations that I have played on the Amiga. Every game is different and no two teams play alike. Some teams are better than others, although for some reason the Cinemaware team is always one of the best. If you are a fan of basketball, this is a keeper. 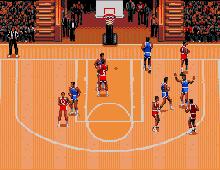 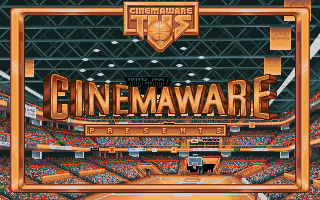