Cinemaware started its TV Sports series with this excellent simulation of American football, designed by none other than Patrick Cook (later of Dynamix's Front Page Sports Football fame). All NFL pro teams are included, each which a full roster of players who's names closely resemble real players but don't match exactly. Each player has attributes that can be edited to ones preferences, including players names, speed, quickness, ball handling ability. These edits can then be saved for future games. When the games starts you're treated to a very impressive opening sequence, which lives up to Cinemaware's earlier classics and sets the tone for the game.

The game itself plays beautifully: the animation and scrolling is very smooth and joystick response is right on as is the difficulty level. A very nice touch to the game is when you score a touchdown you are sometimes treated to an interlude showing everything from cheerleaders dancing to the opposing team letting out their anger. This is a great feature as the interludes are funny and beautifully drawn graphically. There is even a halftime show. Controlling your players is very simple, as is making your plays. There is a playbook with predetermined offensive and defensive plays but it still takes skill to control the ball carriers. This game is very good as a 1 player game but is excellent as a 2 player game. Another great feature is that all a players statistics are saved every game, so you can compare your team to other teams in the league and see which players have the best stats. 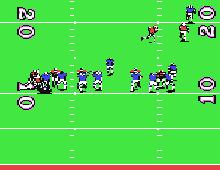