A disappointing game that really could have been better, The World's Greatest Baseball Game offers only a handful of teams to choose from, no tournament play, and irresponsive controls. It plays like a half-baked game that was released prematurely for some unknown reason. Recommended only as a historical lesson on how a sports game giant could go wrong without sufficient play-testing. Definitely one of Epyx's worst moments as a company famous for sport games. 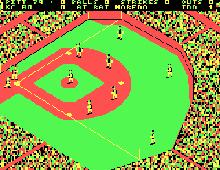