Without a doubt my most favorite game in Technos' Kunio-kun series, Super Dodgeball is an excellent rendition of dodgeball, a fictional sports game that is a very popular subject for Japanese games. If you've never played a dodgeball game before, think of it as "brutal volleyball" - a twisted game of volleyball where you score by not spiking the ball at the ground, but directly at the opposite team.

Similar to a volleyball game, the court is divided into halves: your team occupies on half, and your opponent the other. Each team has six members: three players on the court, and the other three who stay around the perimeter of the court, waiting to catch any balls that fly outside it. Once you have the ball, you must try to swing it as hard as you can at the opposing team, usually by running, jumping, and pressing the B button repeatedly to slam it down on the hapless opponents. On the other hand, if the other team has the ball, you have to either avoid it or catch it with the A button. Much like a typical 2D action game, each character has a life bar, and you'll be out of the game (only for that particular game) if it runs out. Once you manage to knock out all the players on your opponent's team, you'll win the match.

If you have played River City Ransom or any other Kunio-kun games on the NES before, you know what the graphics looks like: short, stumpy, "SD" style players. The graphics and animations, like other Technos games, are both top-notch. The real fun comes when you execute the "super moves" that are unique to each character. Usually accomplished with rapid button bashing, this causes the ball to do a number of physically impossible feats, such as splitting into three smaller balls, curving backwards in midair, or hit the poor guy so hard he flies outside the court. This makes the game a lot of fun, especially against another human player in 2-player mode.

Despite the extremely simple gameplay, you'll have a lot of fun discovering each player's super moves, and spiking the hell out of the other team ;) If you enjoy wacky sports, love River City Ransom, or are a fan of addictive 2-player games, you can't go wrong with this old game that wasn't very popular outside Japan (perhaps due to people's unfamiliarity with the dodgeball game). 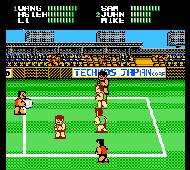