Stormfront's underrated Tony La Russa series continues with Tony La Russa Baseball II, an astounding sequel that features numerous enhancements that makes a great game even better. The innovative "fly ball cursor" is even more easier to use this time around, and there is a ton of updated statistics and exciting new coaching features that makes the "simulation" aspect of the game much more complete.

As in the first game, TLRB II lets you control any US baseball team of your choice and lead them to the World Cup. If you prefer managing a league of your own creation, the Fantasy Draft feature allows up to 30 gamers to trade, bargain, and exchange major league players to create their own individual teams. Other features include all new 256-color graphics, expanded statistical accuracy, individual player portraits, and play-by-play commentary. Suffice to say that if you like the first game, you'll love TLRB II. It's a great update to an underrated classic, and bodes well for the series that ended up having 3 more sequels, with the last one released in 1997. Highly recommended! 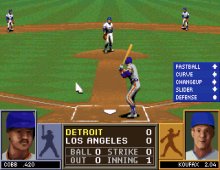