Still primarily a roster extravaganza, OTB includes the rosters for all major league teams 1871-1981, including the National Association, The Federal League and the Players' League. Like Earl Weaver and the other Tony LaRussa games, players' historical statistics are compared to their colleagues to derive ratings in a variety of categories. The gameplay is identical to the Tony LaRussa games - easy, intuitive and deep. You get the usual Tony LaRussa quirks. There are a lot of long singles, nameless players, and few foul balls. The game comes with 16 oldtime stadiums, though modern stadiums can be imported from TLB 93.

The bad news first: 110 years of rosters has a lot of potential for error, and we should be thankful that the researchers did not make more mistakes. Still, the game shows a lot of signs of carelessness in compiling the rosters and ratings. There are no switch-hitters (no, not even Mantle. He is dubbed a right-hander like the rest), some players are given no defensive stats whatsoever (making them useless in the field) and if a player was traded mid-season, his stats for the first team are given to all his incarnations that year.

The thing that makes OTB stand out, besides the size of the roster database, is its Time Machine. Thanks the wonders of statistical analysis, you can play your game or season under the conditions of any historical season up to 1994. Want to make Babe Ruth play in the dead ball high point of 1906 or pitching heaven 1968? Do it. Want to try Cap Anson in homer happy 1950s or the offensive high point of 1930? Do it. The customization of leagues is easy enough for you to mix and match players from a number of leagues and periods. With each player normalized to his own era, the resulting numbers aren't too strange, unlike the Earl Weaver games, which were dominated by the early teams in inter-era seasons.

The Time Machine isn't perfect by any means. In another example of the lack of attention to detail, some years and eras play more realistically than others, and you get very different results in some seasons if you play through a year instead of simulating the whole thing. For example, the period 1975-1981, when simmed, is a pitcher's paradise with few hitting over .320 or 20+ home runs. When played, the numbers are a little more accurate - though there are too many stolen bases in both cases. Popular seasons (1905, 1927, 1930, 1954, 1961, 1968) play very well, so they were probably play-tested to death. The nineteenth century is harder to judge, naturally.

I highly recommend this game in spite of its flaws because of the many possibilities. Any serious baseball history buff MUST have this game, and a casual fan will certainly learn a lot about the evolution of America's National Pasttime. 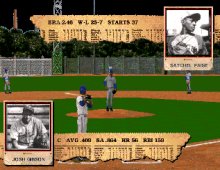