One of the best baseball series ever made, Earl Weaver Baseball nevertheless was very short-lived-- only 2 were released in the span of 5 years. In every respect, both games are pioneers of the genre: great graphics and sounds (for their time, of course), amazing customizability, and incredible play value make EWB among the best baseball games ever made. Baseball Sims have come a long way since then. The original Earl Weaver Baseball deserves to go down in history as THE first sport game that successfully combines strong arcade gameplay with rock-solid statistics. Prior to its release, sports games tended to be simplistic arcadish games or dry statistical models. Earl Weaver brought both of those approaches together and gave birth to the statistical/simulation model. Earl Weaver Baseball 2 continues the high standards set by its predecessor by becoming one of the first baseball sims to employ more varied sound. You could even see a manager sometimes coming out from the dugout once in a while to argue with a call!

One of the strongest parts of the game is its configurability. One can create the perfect player who always delivers or a stadium of unbelievable proportions. League and non-league play are also possible. Seasons can be of any length, although gamers looking for automatic playoff modes will be disappointed. Players from different eras can compete on the same field, helping inveterate baseball fans argue about who was the best center fielder of all time, etc. Fields from different eras are also available and factor in such variables as wind and astroturf. Helpful advice from the great manager Earl Weaver is easily accessible.

With spot-on gameplay, solid controls, and virtually unlimited replayability, EWB2 is a game that deserves to stay on every baseball fan's hard drive. Although the graphics are a little dated, the gameplay and the stat engine are outstanding. Maybe some of the game companies can learn from the older games. Many games nowadays can't even come close to touching the EWB series. The creativity and intuitive design made the game infinitely enjoyable. No matter how many times you play, there's always something more to do. A true classic, without a doubt.

Note: In a wonderful break from the usual lack of support for discontinued products, Eddie Dombrower, the designer and copyright holder of EWB games, maintains a wonderful EWB Support Page on the Web that contains many stats and utilities. Best of all, he is hard at work on I Got It Baseball, an unofficial EWB sequel that is based extensively on the same engine. 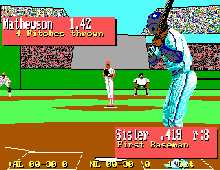