The people who brought us FPS: Football Pro, one of the best football games ever made, has done it again with baseball. Unfortunately though, Front Page Sports: Baseball Pro never achieved the same level of accolades and commercial success as its football counterpart, perhaps due to lackluster graphics, awkward interface, and inferior action mode to well-known favorites such as the Hardball series.

One of the first things users of Football Pro will notice is the new user interface. The interface is basically reams of drop-down menus. It isn't the most user friendly system to use because of the fact that it is sometimes hard to find the selection for what you want. What this interface does allow, however, is a lot of options, since sub-menus can be nested almost infinitely from within menus. The amount of options in FPS: Baseball Pro is simply staggering. For example: associations can be defined for as little as 8 teams and as much as 48 teams (even numbered) in as much as three leagues, with three divisions each. The designated hitter rule can be on or off in any league. You can choose how long you want the season to last (Short season, Half season, and Full season). There isn't a need for a separate fantasy draft program for this game, because it is a bui lt in option. There is also a reset teams selection with more control than Football Pro.

One of the best features of the game is the way it handles rosters and statistics. Rosters are divided into four parts: An active roster, an AAA roster, a disabled players list, and a low minors roster. There is an unlimited number of transactions that can be made between the active roster and the AAA roster. The low minors roster is for players drafted in the Amateur Draft. Players can be put into this roster if they are younger than 26 years old and are released and resigned the next week. This system nicely portrays what happens in the real baseball world, and is much more flexible than similar feature in other baseball games.

The level of control you have extends to the players as well. Players are rated in numerous categories that will please all fans of baseball stats. Batters have ratings for contact hitting, power hitting, speed, fielding for all nine positions, arm strength, how much of a pull hitter a player is, and how likely a player will hit the ball on the ground or the air. Pitchers have ratings for holding runners, endurance, control, how much of a ground ball or flyball pitcher he is, and seven different pitches. There are also other gameplay options, including injuries, fatigue, the DH rule, and many more. There are twelve ballparks in the game, each depicted quite realistically (The Ballpark at Arlington, The Astrodome, Atlanta Fulton County Stadium, Oriole Park at Camden Yards, Candlestick Park, Comiskey Park, Dodger Stadium, Fenway Park, Jacobs Field, Royals stadium, Wrigley Field, and Yankee Stadium). And last but not least, the game offers an instant replay option, innovative Camera Angle Management System (CAMS) that allows you to position the camera anywhere in the ballpark from any angle.

As comprehensive as FPS: Baseball Pro is, there are some downsides that hamper the overall enjoyment. First of all, fans of action-oriented games such as Hardball will find in-game controls awkward and graphics uninspiring. There are also bugs, e.g. frozen mouse, system hangs, and the like. Fortunately, the latest patch fixes most of these niggling issues. The AI sometimes makes some questionable decisions, and some results are downright improbable-- such as the fact that relievers who don't pitch through the 5th Inning can get a win. Despite all these criticisms, though, FPS: Baseball Pro is one of the very best baseball simulations ever made. Anyone looking for furious action on the pitch should look elsewhere, but for armchair manager, this is a must-have. 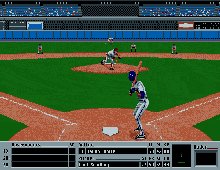