FPPro '95 is a challenging and realistic simulation that will appeal to everyone from casual to die-hard fans. The best feature of the game is definitely the play editor, which lets you edit existing plays or create virtually any type of play that you would like to use. Your players can execute basically any action found in the real NFL game, such as quarterbacks using play-action, receivers stutter-stepping to fool the cornerbacks, and many more. Basically if you see it in a real game, you can simulate it in FPPro '95.

Another excellent evolution from the original 1993 version is the 360-degree, fully rotoscoped VGA animation. This lets you place the camera anywhere in the stadium and watch the action from any view. The AI has also been improved over FPSPro '94: your computer opponent will adjust his strategy if you follow the same play week after week. This makes league play highly challenging and unpredictable.

Overall, FPPro '95 is a must-have for anyone who likes American football. It has everything you could ever want in a football game, and can easily stack up against newer, flashier games thanks to its incredible depth and breadth. With many customizable options, you can play either an arcade-style game or micro-manage your team through the seasons - the choice is all yours to make. Highly recommended. It may not exactly fit the 'old game' label, but it is one of the rare gems that can't be praised too highly. A must-have. 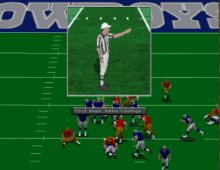