The original in Stormfront Studios' popular baseball game series combines a high production value action game with a detailed and accurate statistical simulation. The result is Tony La Russa's Ultimate Baseball, one of the very few baseball games that strike a near-perfect balance between action and simulation. In Stormfront's own words: "Built on the tradition of Earl Weaver Baseball, Tony's all-new strategy was created in collaboration with award-winning major league manager Tony La Russa. Included among its many outstanding features are a complete set of manager options, full season replay, detailed statistical leaders, and the innovative "fly ball cursor" which, for the first time in computer gaming, gives players an accurate and controllable method to catch fly balls."

Aside from being a great game, TLRUB is also notable for introducing many new features to the genre. It was one of the first series to offer full-career play, play-by-play recording capabilities, and even great coaching tips from La Russa himself to teach you his tricks of the trade. The graphics is smooth and very well done for its time, with a very intuitive interface. Although the career mode is restricted only to US-based teams, the multitudes of options will keep any coach occupied for months on end. Another hallmark that sets the game apart is the sheer flexibility: you can customize leagues, create players and make trades. The game even includes a large amount of stack tracking, so that you can see when players will be hot or cold. And when you create your own players, you can even choose what type of player he will be (e.g. whether he will start off hot and cool off near the end of the season, or stay cold in the beginning and be unstoppable near the end).

Overall, TLRUB may never match Earl Weaver Baseball's reputation as a truly revolutionary game, or Hardball series in terms of unmatched action on the pitch, but it's definitely a must-have if you're looking for a game that excels in both the managing and playing aspects. 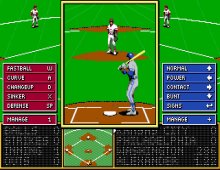