The baseball version of the somewhat popular sport series offering several different games in a sport series. You control a bunch of kids (4 actually to be precise) and you have 2 options to where you can play the game at including a regular baseball field. You can either pick each player yourself or let the computer make 2 random teams. It doesn't matter that much whether you pick them yourself or not since it's your skill in the game that matters.

The game follows the official baseball rules within reason since you are playing on a small field or a similar place that isn't actually a real baseball field. The controls are a bit annoying since your players seems to respond differently and often very slow so they don't move the way you wanted them to. The way the player you control switches can also be difficult to get used to since it can happen quite fast and you have to get an overview of what's happening first.

In Street Sports Baseball you can see how bad a game can be even when the developers have a good idea. The graphics are poor as well but since they are in EGA format they are at least better than the other games in the series. The PC speaker sounds doesn't help either on the overall rating of this game. Although the game might not sound that good it is still one of the few baseball games around so you might find it interesting.

Solid standard game of the Street Sports series. I have to be honest I never really knew the rules of Baseball. Nonetheless I played this one for hours back on my C64. The graphics of this version are worse - of course - but it's still a surprisingly good game. The idea of letting the girls and boys of the neighborhood play against each other works out nicely. Especially funny is the fact that some of the players that belong to the best in Street Sports Soccer and Street Sports Basketball are the weak ones here - hehe ;) I don't know if the game is a good baseball simulation, can't judge about that - it's fun though - good game.

As its name implies, this is a "street" version of baseball that's somewhat fun to play, especially in 2-player hotseat mode. Despite non-conventional apparatus (dirt mounds and manhole covers for bases, etc.), this is just another arcade-oriented baseball game that's not that different from a lot of other (and better) games you can find. 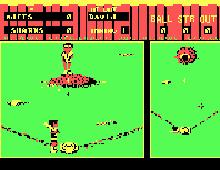