Completely new approach to a computer basketball game. You'll play basketball - on the streets! Before the game you have to select 3 players for your team then beat the opposite team. You also have to select where to play: local playground, school, street... The game is not too hard but the bad thing is that there is no real competition in it - no tournaments, no league. Single games only.

The basketball version of the somewhat popular sport series offering several different games in a sport series. You control a bunch of kids (4 actually to be precise) and you have 4 options to where you can play the game at including a school, city, alley and suburbs. You can either pick each player yourself or let the computer make 2 random teams. It doesn't matter that much whether you pick them yourself or not since it's your skill in the game that matters.

The game follows pretty much the official basketball rules within reason since you are playing on a small field or a similar place that isn't actually a real basketball field. The controls are a bit annoying since your players seems to respond differently and often very slow so you don't get the ball. The way the player you control switches can also be difficult to get used to since it doesn't always make sense but once you get used to it isn't that difficult to play with although it would have been better if you just had one key to switch player with even if it wasn't the player being nearest to the ball.

In Street Sports Basketball you can see how bad a game can be even when the developers have a good idea. The graphics are poor as well but since they are in CGA format there couldn't have been done much about it unless they would have made it in EGA graphics. The PC speaker sounds doesn't help either on the overall rating of this game. I'm not sure if this game can be recommended since there are other basketball games from the same period that are better and nicer to look at.

This is - believe it or not - one of the best and most fun basketball-games ever made. You choose your 3 players out of 10 different kids - each with it's own skills and disadvantages. The great thing is that it REALLY makes a difference. I played this game at the time it was new and it was really marvellous to see how different those characters act. Not only when they are controlled by the computer, but even if you play them. I have to admit that I played it on my C64 back then, so I had real colors - pretty good graphics, really. But let's not cry for something we just won't find here. So you eyes will hurt after one or two matches. Well well, the things is you WILL keep playing once you get into it. The graphics aren't THAT bad for CGA, sometimes the ball is a bit hard to make out, but it's playable - VERY playable. The computer doesn't play too strong. Only at the hardest level he seems to be able to compete, but only because the human-controlled players seem to be a bit more moody, so to say - they just don't always do what you want them to do. It's more fun to play against a friend anyway.

After all a really great game-concept, but sadly the PC-version lacks a lot - better play the C64-version, that one's really good!

Another "street" sport from Epyx, Street Sports: Basketball, unlike Baseball before it, is actually different from a typical basketball game and does follow the "norm" of street basketball: there are only 3 players on each team, and the court is smaller than normal. The court is also ringed with curbs which can be used to bounce the ball back into play. Overall, a fun game despite primitive graphics and controls. 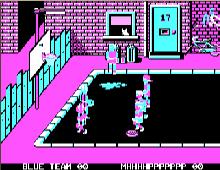 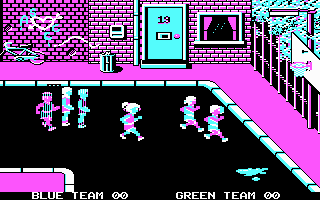