As in NFL Challenge, you can play against the computer, a friend, or watch the computer play itself. There are many plays to choose from, and fouls are handled effectively in the game. One of the things I like most about the game is the pre-match options, which lets you see team profiles (complete with comments on their strengths, weaknesses, and who the star players are), as well as comparison of team strengths. There are 3 difficulty levels from easy to difficult, although even the easy level will prove quite a challenge to many gamers, since the computer plays very well.

Before anyone has any misgivings, let me emphasize that Basketball Challenge is a 100% text game-- players are depicted as numbers moving around on the screen, with running commentary at the bottom. This is more than adequate, as the game's emphasis is on realism and coaching options, not arcade controls. With solid AI and great gameplay, Basketball Challenge is highly recommended for all armchair coaches. The lack of career / tournament mode and the absence of NBA endorsement are just about the only things missing from the game. 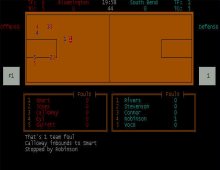