One of the oldest football games ever made, XOR's NFL Challenge remain to this day one of the most ambitious simulations of its kind, containing over 30,000 lines of C and Assembly source codes after over 10 man-years in the making. The result is a very thorough and realistic simulation of football that was impressive enough to win endorsement from the NFL.

The game comprises of 2 modules: macro and micro. The macro model computes and records various statistical averages to model the entire NFL season, while the micro model calculates the outcome of a single match. The game boasts of having several NFL experts help create in-game offensive and defensive playbooks, and it shows: there are dozens of plays you can choose from, and penalties and injuries are handled realistically. Graphics is not much to speak off-- it's either all text (you see a red triangle, representing a ball, moving back on forth on the screen), or some graphics where X's and O's represent players. Still, for a game that focuses on the simulation aspect of a sport as opposed to the action, it's more than enough. There are many coaching options available, many of which became standard in later football games: in addition to calling plays, you can call a time out, and even use a neat "two-minute" mode, which is modelled after the "hurry up" offense often seen in real football games. In this mode, all ball carriers on that team will make an extra effort to get out of bounds and stop the clock. The quarterback will make more and longer passes, resulting in longer completions but much higher risk of interception. The computer AI is quite good, as it will take advantage of this "two-minute" mode, as well as constantly change playbooks. Each player is rated in different skill categories, which affect the outcome of the game. You can play against a friend, the computer, or even watch the computer play itself.

Overall, NFL Challenge is a great simulation that definitely sets a high standard for other games to follow. It's the granddaddy of games such as Tom Landry Strategy Football, and the level of thoroughness, fun, and realistic outcome is excellent even by today's standard. 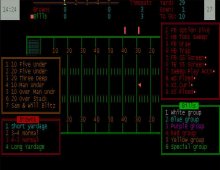