A faithful translation of a fun arcade sports game (a rare event in itself) by Konami, NFL Football is a fun football game that offers a good balance between coaching and action without taking itself too seriously. As an official licensee of NFL's professional football leagues, you can select from a number of well-known teams (e.g. the Broncos or 49ers) from both the Western, Central, and Eastern Divisions, for a total of over 30 teams. You can play a preseason game, practice, or create a new league and lead your team to the Super Bowl.

Despite the game's origins on the arcades, there are more coaching options than other arcade-oriented games of this ilk (for example, Data East's Monday Night Football), although less than full-fledged simulations of the sport. One of the game's best features is that the game is played in real-time-- you only have 45 seconds, for example, to choose offensive/defensive play tactic. Make no move, and the referee will call "delay of play" and you'll suffer a 5-yard penalty. This real-time emphasis keeps the game brisk, and requires all decisions to be made quickly and decisively. The graphics, as one would expect from Konami, is top-notch, and "icings on the cake" such as substitution, replay feature, and drafting, are handled efficiently and in a user-friendly manner.

With an average "season" lasting only a few games long, and lack of in-depth managerial options, NFL Football is at best a fun arcade-oriented football game that doesn't pretend to be a serious sim-- perhaps owing to its heritage as a coin-op game. It's a great introduction to the sport for beginners, though, or anyone who is bored with the likes of Monday Night Football or longer football sims. Recommended! 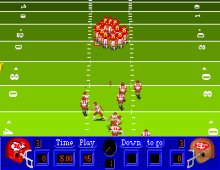