Old american football simulation co-designed by famous sportscaster John Madden. The first game in EA's long-running Madden series. I guess different versions of this game have been available on almost every platform - with the Mega Drive version being the most famous of them all. Graphics look very poor even for its time, but the game concentrates more on tactics than pure action. Overall, a decent football game that should please fans of the sport, although this PC version is not the best one. Too bad only 16 teams are presented in the game. Should be played in real DOS mode as beeper sound usually doesn't work right in Windows' DOS emulation. If you like this one, also check out its follow-up John Madden Football II, also on this site. 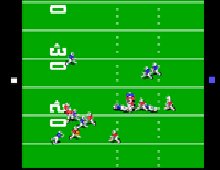