The soccer version of the somewhat popular sport series offering several different games in a sport series. You control a bunch of kids (4 actually to be precise) and you have 2 options to where you can play the game at. You can either pick each player yourself or let the computer make 2 random teams. It doesn't matter that much whether you pick them yourself or not since it's your skill in the game that matters.

The game follows pretty much the official soccer (read: football) rules within reason since you are playing on a small field on a street with very huge goals. The goals are actually one of the problems in the game since they are simply too huge. I think half of the size would have been more suited and offered more challenges in the game. It's very common that if shoot the ball towards goal there is a huge chance that you will score since the goalkeeper can't cover the entire goal.

In Street Sports Soccer you can see how bad a game can be even when the developers have a good idea. Not only is the ball glued to the feet of the players but it's also very difficult to control your players and tackle if you are used to newer football games. The graphics are poor as well but since they are in CGA format there couldn't have been done much about it unless they would have made it in EGA graphics. The PC speaker sounds doesn't help either on the overall rating of this game. Not a recommended football game - not even for football fans.

I'm usually a fan of the Street Sports series, but it looks like the "youngest" child of this family is also the weakest. The idea stays the same, you choose your team from some kids of the neighborhood each with own skills and disadvantages. Unfortunately the field is WAY too big for those 6 players of which 2 are standing in the goal all the time. The game is slow and not really involving as the other ones. Sad case, it could have been another fine game...

Probably the worst game in the budget-priced "Street Sports" series, this soccer game won't knock anyone's socks off. Tiny ball and players that all look the same, huge playing fields to struggle through, and irresponsive controls makes this one of Epyx's worst. If you want a good arcade-oriented soccer game, play Sensible World of Soccer instead :) 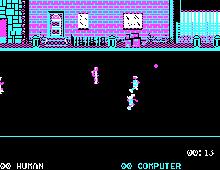