Tynesoft's last attempt at a sport tournament game is a much better attempt than Summer Olympiad, mainly because the range of sports they select are much more adaptable to computer games-- meaning the events are more interesting, and the controls more intuitive. There is speed skating, two-man bobsled, and a host of other events that form a typical winter tournament. The graphics are good for their time, and the finger-tapping parts are kept spaced out and not too hard for anyone with little reflexes (like yours truly).

As in Summer Olympiad, you first choose a country to represent from a list of 20 or so. You can then practice each individual event, or join the full tournament. In terms of sophistication, the game lies somewhere between Epyx' Winter Games and Accolade's Summer Challenge, but it is almost as fun as both games despite being much less known. I actually enjoyed it more than the PC version of Epyx' Winter Games, which looks primitive in comparison even though the graphics modes are the same (CGA). Recommended! 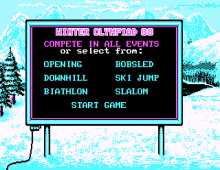