Winter Olympics, what more to say? The usual set of winter sports on a club, national or olympic level. The game is similar to the well known Accolade's Winter Challenge but is a bit harder and less enjoyable. Fans of winter sports will like this one.

An okay game based on the 1994 Winter Olympics tournament at Lillehammer, Winter Olympics by US Gold includes a decent variety of events, but not nearly as good as Accolade's better-known-although-without-official-license Winter Challenge. The graphics are adequate, but gameplay options are lacking: you can't practice in any event before the tournament since the game offers only 2 options: "Full Olympics" and "Mini Olympics." The events are fairly standard (e.g. skiing, shooting), but they are much more difficult than Accolade's game due to awkward and unresponsive control schemes. Some events are notably better than others -- perhaps a result of them being coded by different programmers. Overall, Winter Olympics is a decent game that is worth a look for Olympics fans, but won't hold anyone's interest for long. 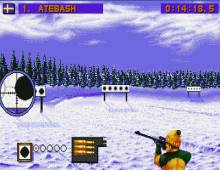