UEFO Euro 96 England (Euro 96 for short) is a fun and quite unknown football game from Gremlin. Although based on its Actua Soccer engine, Euro 96 is slightly worse than most in the series, perhaps due to Gremlin rushing it out the door to coincide with the 1996 Euro Cup tournament that was held in England. The good news, of course, is the presence of all the teams from Euro 96, complete with the players' real names and statistics.

Euro 96 has all the options you would expect in a commercial football title: training, friendly matches, and Euro Cup competition. The training options are quite nice - you can train your team on the pitch with an opponent's goalies to practice various shots. The 3D engine of Actua Soccer is more than adequate for the action, although if you have played any game in the series before, you will find little new here. The hallmark of the series remains intact: you can view the action from any angle you choose with camera views such as far and goal line. Also, a small radar on the screen is indispensable for showing the positions of all the players and the ball.

The gameplay interface is easy to learn, although you will need a lot of practice to do fancy moves like a disguised pass or a power shot. The range of options is good: for example, you can turn off offside rule (although that really is cheating ;)) and even change referee's booking records to avoid collecting too many red cards. For the friendly games you can even pick the referee, all of whom are ascribed different values of "vision" and "discipline." A great feature that should be in more games.

The bells and whistles are pretty good - in addition to smooth graphics, you get plenty of sound effects including cheers, jeers, and nearly 30,000 words of dialogue with the voice of Barry Davis, BBC 1's number one commentator (unfortunately missing in this CD-rip). Euro 96's weak points lie in shallow coaching options and unchallenging AI, which is not exactly stupid but hardly as good as Actua Soccer 3, arguably the best game of the series. Worth a look for football fans, but not the best of an underrated series since it has been surpassed by Actua Soccer 3 in almost every aspect. 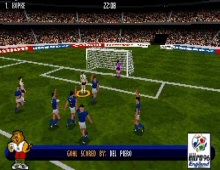