Sega Worldwide Soccer (WWS) was, in X'mas 1996, one of the best selling games for the Sega's "golden boy", the CD-32 bit Saturn. Reasons? It was the first *really* good 3D soccer game to be released on any platform. Easy to learn, yet quite challenging to master, evolutive players, good graphics (for it's time), fabulous player animations, name editing options for the 48 nations involved (and NO crazy picks), three cup modes... What else could you ask for? (well, actually club teams, which appeared on WWS98, were never ported to any other system).

This is a faithful conversion for the PC-CD platform, released about one year later, with unlimited goal saving options, a (poor) Direct3D mode, some minor AI tweaks (I remember that the referee was much stricter on the Saturn version, and players sometimed used to run around the player with the ball if he was standing) and a Link (netplay) Mode. The great intro is unchanged, and shows how good the game is - believe me, you can do ANYTHING you see on the video. The music comes directly from the CD and menu graphics are the same (which resemble the menu of ISS Deluxe for the SNES).

Gameplay is quite good in this one. The ball flows freely (i.e. it doesn't seem to be artificially attached to the players' shoes), and the players don't seem to drag around like they do in other games. You can correct the aim of your shots with the ball on air, great for long distance shots or passes as the difference from a great pass/shot from a miss is decided in-flight. This allows many ways to score, including headers from crosses, shots outside and inside the area, lobs, blunders (lots of them...) free kicks... in few other games you can score in so many ways like this one. The biggest drawback is when you're playing down, where the goal net sometimes blocks your view.

Graphics fall from the standards set by FIFA 98 some months later, but most kits are recognizable, the ball is excellent, and the rain is one of the best simulated (you can see splashes from player's feet and the ball, that actually slows down and bounces less on moist ground), the crowd (three completely different stadiums avaiable) is alive with flags... as I said before, the D3D mode don't add very much to the pack.

Although great in 1997, the graphics are a bit dated now, but still animations are nearly perfect - you can actually see when it was a foul or not - the animations for shooting/passing/lobbing are different, so the game is quite rich on this section. There are a few special moves that will take you some time to learn, but they aren't vital for playing the game right. Players are actually split into left and right footed, and you must learn what are the best spots for each to score.

Sound is definitely poor... Commentary lacks quality (German and English avaiable), and IG sound is repetitive. CD-Music is ok, but nothing to cheer about. For long term play, you have a "Sega Ranking Mode", that lists all participations and wins in the three modes (World Cup, Tournament and League). You can try to push Wales or El Salvador from the bottom places to the very top, altough that will take one awful lot of time - losing a league may have devastating effects in your ranking - but this is what the game is all about - building a legend.

The major drawbacks in the game are the bad goalkeeper AI (he rarely holds a shot, gets beaten too many times on crosses, never get's out of the net to face a alone striker, sometimes let harmless balls get in and save weak shots that get in), the lack of appearence editor for the players (If you use the 94/97 players, you should have no problems, but if you want to use more recent squads sometimes players don't look as they should) and the reduced numbers in each team (16). Definitely a top game, no less. A must-have. 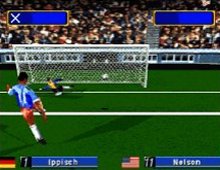